Wisdom and Gratitude on stage

Kuala Lumpur, Malaysia – This was a gathering of probably one of the most mindful people on the planet. The sight of golden hued monks and nuns lining up to take their seats on stage at the HGH Convention Centre in Kuala Lumpur, and then seated in rows in accordance to the number of vassas (rain retreats) as a member of the Sangha, was something that moved more than 2,000 visitors who were there that day. 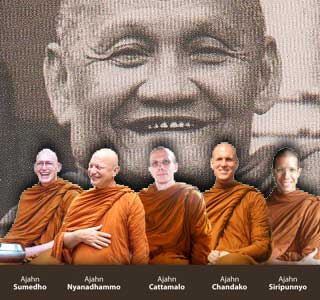 There were no political tinged speeches, no politicians present, and certainly no need for any politically correct innuendoes. The day just started simply by having the monks and nuns come on stage, take their seats and then proceed with chanting and transference of merits. Then the Sangha had their dana, and when that’s done, everyone just came back into the hall to welcome a Dhamma talk by the revered Ajahn Sumedho.

The simplicity of it all was – as the hip and young would say today – awesome. For many who have participated in religious ceremonies, complicity to elaborate rituals was something that is expected. But who would have thought that just by having monks and nuns coming onto stage would be a spiritually electrifying experience by itself?

The answer to that could probably be linked back to the early teachings of the Grand Dhamma master of the monks at the hall. After all, the gathering of the day was to mark the remembrance of the 18th anniversary of the passing of Luong Poh (Ajahn) Chah, who is credited with inspiring the establishment of the Western Buddhist Sangha Order, after ordaining Ajahn Sumedho as his first western disciple in the 1970s.

Luong Poh Chah was legendary in sticking with the vinaya as the bedrock in the training of monks. The tools of Dhamma teachings were no more than the person involved, and the basic four requisites of the monk.

The teaching stage would just be as humble. It could be under a tree, or while sweeping the temple’s compound, or watching ducks drinking from a pool of water, or just simply talking about chicken poop. Luong Poh was most effective when his words strike a chord with the listener’s heart, a unique skill which attracted hundreds of non-Thai students into the deep jungles of Northwestern Thailand.

It was his unique skill in simplicity and the audacity to apply the simplest of examples to convey the deepest meanings that opened minds and hearts. It was this ability that made him to become one of Buddha’s great disciples in modern times.

If you have lived with someone as great as this long enough, obviously something would rub off. This was apparent in the manner and personality of Luong Poh Chah’s most foremost western disciple, Ajahn Sumedho.

That moment manifested itself when Luong Poh Chah requested Ajahn Sumedho to establish a monastery in England. Being an American who had never been to England, he had great doubt whether there would be adequate support for him to do so. As a strict practitioner of the vinaya, where would he find people to support monks during pindapat in perpetually grey, moody weather?

Luong Poh looked at him and said: “Aren’t there any kind people in England?” And Ajahn Sumedho replied, “I’m sure there are,” and that was all it took to galvanise the establishment of the first Western Buddhist Order outside of Thailand.

And this would serve as paradox – more like the bedrock of spiritual paradox – of the kind of Dhamma emanating from the hearts and minds of the Ajahns: Simple words pointing to enlightening breakthroughs. Surface sounding talks that masks deeper meanings. Ordinary magic.

It is said that the deepest, most profound teachings are not spoken, but subtleties demonstrated. As the monks and nuns got themselves seated on the stage at the HGH  Centre, people got to see more than venerated venerables.

Before the audience very eyes, a demonstration of 2550 years of Buddhist history unfolded. There it was, the garment and the way they were folded and worn, was exactly how it was during the Buddha’s time. And so too how the Sanghas were helped onto their seats by their kappiyas (assistants), as was the manner which their bowls were handled during dana. Along the little corridors separating the rows of seat, all the four basic requisites were on view: clothing, food, medicine and inside the hall, the veritable shelter.

Behind the stage, away from the eyes of the audience inside the hall, was a little ceremony which many did not get to see. As the monks and nuns return from their dana, appointed kappiyas would wipe their feet before they get back on stage.

This was not planned as a cultural event, yet Buddhist culture was in abundance. Deep inspiration and soaring faith need not be a product of song and dance, yet if we allow ourselves deep reflection and contemplation, Dhamma may just find a way to dance itself into our hearts.

After all, the voices of great masters stays with us forever not in tapes and MP3 files, but how we immerse their lessons in our thoughts and consciousness. We pay our gratitude to them not through rituals and rites, but to live their virtues and demonstrate them in our encounters with every animate being, mindfully and compassionately.

And so was Luong Poh Chah’s teachings relived on his remembrance day on the stage of the HGH Centre’s hall? We may not know, but if we listen closely, we may hear a whisper from the old master as we look at his smile in the posters lined along the perimeter of the hall.

“Aren’t there any kind people in this world?” I’m sure there are. And that’s good enough for all of us to keep the Buddha Dhamma going.