Bangkok, Thailand -- Spend some time with Susan Pembroke and you will begin to question many of the assumptions often made of supporters of bhikkhuni, or fully-ordained Buddhist female monks. 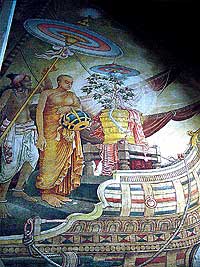 << The wall-size mural painting at Kelaniya Temple, in Columbo, Sri Lanka, depicting the arrival of Bhikkhuni Sanghamitta at its shores to start the lineage of female clergy. Sri Lanka is also now the centre of Theravada bhikkhuni ordination.

Some common misconceptions have them as being angry feminists demanding equal rights and accusing bhikkhus of misogyny, Westerners imposing Western concepts of gender equality and human rights on Asian culture, or women simply wanting ordination for status.

In some cases, arguably very few, there may be a degree of truth to such characterisations. But here is one to which none of the above apply.

Pembroke is the founder and president of the Alliance for Bhikkhunis (AFB), a US-based non-profit organisation whose mission is to support the development of thriving Theravada bhikkhuni sanghas in the US and Thailand. While the word "alliance" can have martial connotations, Pembroke herself exudes a gentleness and warmth that one can immediately sense. Perhaps it comes partly from having practiced meditation for over 20 years. She currently serves as a guiding teacher of the Insight Meditation of Ventura, a meditation organisation in California that she also founded.

For her work supporting Buddhism, she was honoured with a 2009 Outstanding Women in Buddhism Award. It is striking how in many ways she actually seems very Thai, blonde hair notwithstanding. She speaks softly and very diplomatically, and when she wais (putting hands together in a gesture of respect) to monks and nuns she bows deeply in a very natural way, showing none of the stiffness or awkwardness often seen in foreigners.

For all her delicacy, though, she's no shrinking violet. Rather, a floral expression that seems more fitting might be "steel magnolia". Or steel lotus, as it were. Pembroke and the other bhikkhunis may do it with a softer, feminine touch, but these are women who get things done.

The AFB has grown quickly in less than three years and is now a fully incorporated non-profit organisation with several projects underway. But it began very modestly, out of a simple human impulse to help someone in need. In 2006, Pembroke attended the annual conference convened by Sakhyadhita, the worldwide Buddhist women's organisation, and met Venerable Rattanavalee, a bhikkhuni from Thailand. "I just felt an instant emotional connection with her, and was very impressed with her sincerity, integrity, and commitment to helping women." She also met two other Thai bhikkhunis, Venerables Silananda and Dhammamita.

Concerned as to whether they were getting enough support, she wanted to do something to help - even something very simple, such as sending money for their education. In order to raise money, she had to establish a non-profit in the US. And once she got back to the US and was doing so, she wondered, "What about bhikkhunis in America?" 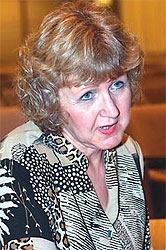 ‘‘Ordaining as a bhikkhuni is a completion —a wholehearted immersion. Giving yourself fully to becoming ordained is a joyful, happy, satisfying, rewarding, completing experience, as if you’ve come home SUSAN PEMBROKE  >>

Starting and running a non-profit organisation is no small task, but Pembroke took it on despite her already packed schedule. In addition to working full-time as a psychotherapist, she also devotes a lot of time to teaching meditation and heading Insight Meditation Ventura.

Pembroke says quietly, "I don't do this because I don't have enough to do. I just cannot, in good conscience, pretend that I don't know what I know and turn my back on women who are vulnerable."

Her impulse to help these women partly comes from a wish to honour her teacher Ayya Khema. "Because of the great gratitude I have for her, I feel a real wish to help bhikkhunis. That's what she would have wanted me to do. She died a few years ago, but this was a very important goal for her. She cared very much about women's equality."

Ayya Khema, one of the most renowned female dhamma teachers in contemporary times, was a German woman who was ordained as a Ten Precept Theravada nun in Sri Lanka in 1979. She founded several Buddhist centres, including the International Buddhist Women's Centre and the Parappuduwa Nun's Island in Sri Lanka, where nuns would be able to receive a good dhamma education. She also coordinated the first International Conference of Buddhist Nuns in history, which resulted in the establishment of Sakyadhita. Although she was already well-respected as a Ten Precept nun, Ayya Khema nurtured a wish to be fully-ordained as a bhikkhuni, which she was finally able to do in 1987 at a Chinese monastery in Los Angeles.

"She ordained because she thought it would help her practice," says Pembroke. "She was hoping it would speed her along, help her develop more insight, become more proficient. And her report was that it was enormously enriching and helpful.

"For her, and other women I've talked to, ordaining as a bhikkhuni is a completion - a wholehearted immersion. Giving yourself fully to becoming ordained is a joyful, happy, satisfying, rewarding, completing experience, as if you've come home. Trying to be something different feels foreign and uncomfortable. It just feels so right to fully live the holy life, the perfect vehicle the Buddha designed to support full enlightenment."

Having opened such an opportunity to women as well as men, Pembroke points out, the Buddha put real care and thought into instituting rules to protect bhikkhunis and ensure that they would be able to really flourish spiritually. For instance, bhikkhus were prohibited from requesting or taking food from the bhikkhunis' alms.

"I think the Buddha was very revolutionary and radical to care about gender equality 2500 years ago. It's nearly impossible for us to appreciate what an advanced thinker and compassionate person the Buddha was to work so hard in his lifetime to protect women. Out of respect and veneration for the Buddha, it falls on all of us to maintain that spirit of protection of women."

Pembroke sees larger ramifications to doing so beyond just safeguarding the interests of women committed to serious spiritual practice. "When we protect bhikkhunis, we protect ourselves and future generations," reads the motto of the AFB.

"The Buddha's goal was not to die until the bhikkhuni sangha was fully established," she continues. "He wanted us to have the four-fold assembly [of bhikkhus, bhikkhunis, laymen, laywomen]. He said his teachings would not survive unless all four were there.

"For me, to be a wholehearted, sincere practitioner, I feel it is my moral obligation to support the bhikkhuni sangha. It's that important. It's a way for me to show gratitude to the Buddha, for teachings that have been so transformative for me."

With a hint of mischief she adds, "Selfishly, as a laywoman, it's wonderful to have dedicated practitioners who can meditate and study for hours. Most laywomen can't. If I ever need one, I'd be glad my neurosurgeon does it full-time, and not periodically, when they can squeeze it in. The Pali Canon is a pretty big deal. I want to have these dedicated 'spiritual athletes' who can give it their wholehearted effort."

Does she want to ordain as a bhikkhuni herself? "Oh, no!" she immediately replies with a laugh. "I'm not saying all women should do that. I don't think it's one-size-fits-all. Many women would really prefer to remain laywomen or maechees, for many valid reasons, and it's really important to honour that."

"I just want women to have the full choice. So they can decide what is best for them depending on their needs, circumstances, and personality."

Dangerously, the lack of full choice can lower the spiritual bar women set for themselves. Pembroke says, "I've had some exposure to women of Thai descent who have lower spiritual aspirations because they are women, and that becomes an issue for me because the Buddha saw women as being equally capable of being enlightened. He spoke very openly about the accomplished women of his time and praised them."

Since the Theravada bhikkhuni sangha was revived in the late 1990s, a fuller spiritual choice for women is being restored. But many still don't know about it, or know its value. Thus, while the AFB continues with its original work of providing financial and practical support to bhikkhunis and women wanting to ordain in the US and Thailand, another major part of its mission has become education.

AFB works to inform women of the availability, and advantages, of the bhikkhuni option. It also teaches laypeople about the vital role bhikkhunis play in preserving and spreading the Buddha's teachings. The latter is particularly important in the US, where Buddhism is highly laicised and monasticism, male or female, is de-emphasized.

The AFB runs a website (http://www.bhikkhuni.net) designed to be a clearing house for information on bhikkhuni history, news, research, and training centres, with links to bhikkhuni-related websites from all over the world. It also publishes Present, a biannual newsletter on bhikkhuni-related issues, with a particular interest in critically re-examining received ideas about bhikkhunis that may be inaccurate. Although the website and newsletter are in English, the information is reaching a wider audience through Pembroke's meetings with spiritual leaders from different countries, who can in turn disseminate it further.

Indeed, the bhikkhuni revival movement is highly internationalised and well-networked. When Pembroke sends an email, the list can include bhikkhunis, bhikkhus, researchers, journalists, and others engaged with bhikkhuni issues living in the US, Thailand, Australia, New Zealand, and Europe. However, because the circle is still relatively small, there is a warm spirit of community, cooperation, and cross-fertilisation.

During her recent trip to Thailand, Pembroke was able to connect with a range of different Thai bhikkhunis. To further the AFB's educational mission, she decided to film a documentary about Theravada bhikkhunis. Together with a meditation student and friend recruited as camerawoman, she set off on a whirlwind tour of bhikkhuni centres in Nakhon Pathom, Samut Sakhon, Rayong, Yasothon and Chiang Mai and interviewed bhikkhunis, samaneris, maechees, laypeople and a bhikkhu. They then spent two weeks in Sri Lanka visiting important sites related to bhikkhuni history, both recent and ancient.

"I think the situation in Thailand is very dynamic," observes Pembroke. "It could change dramatically over the next five to 10 years. This handful of pioneers will be very important historical figures 20 to 30 years from now, so it seems important to capture this time of transition."

In her interviews, Pembroke asked the bhikkhunis what they thought was necessary for the revival of the Thai bhikkhuni sangha to succeed. "Many disclosed it was the purity of their practice that would protect them. Maintaining the highest level of conduct is essential if they are to gain the trust of the laity and monks."

Pembroke concurs that this is where the real power for change lies - not with her or the AFB, nor with the bhikkhus, but with "women of integrity consistently doing the right thing. Their behaviour - their good-heartedness and total commitment - will change and transform people."

She truly believes there is a place for the unique contributions of spiritual women, for their understanding, insights, and gentle, loving leadership. "It's important for their voices to be heard," she says.

Reflecting on her trip, Pembroke later wrote in the Spring issue of Present, "In wanting to tell their story, I thought I was simply signing up for chronicling the resurgence of the Thai bhikkhuni sangha. Belatedly, I was struck by the realisation that what I was observing went far beyond that. I was witnessing the nascent stage of the revitalisation of Buddhism in Thailand."