Fresh from a humorous workshop by abbot Ajahn Brahm, Alexandria Wong will take his stories over preachy self-help books anytime 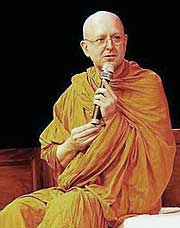 I’ve never read Zig Ziglar, Robert Kiyosaki, Anthony Robbins or any of those big name life gurus. I gleefully delete every life improvement seminar e-mail blast that spams my mailbox. The only how-to book I’ve read cover to cover is The One Minute Manager, and that’s only because it was compulsory reading by my then employer.

Ever since I was commissioned to edit a horrifyingly clichéd book titled Secrets of Making Your First Million or some such name (that’s another story), I’ve felt that self-help books are an insult to our intelligence. They are a thinly-veiled attempt to dupe the gullible and desperate into parting with their money for what’s essentially common sense . . . which made me the unlikeliest person to sign up for two back-to-back workshops entitled, Dealing with Unhappiness and Worries and Discovering Love in Difficult Places.

Blame it on my Greek God. While sculpting my latest hairstyle, he dropped this tantalising one-liner: “If there was one book you must read before you die, it’s this one.”

I sat up with a start, almost causing an accident. Andrew — an astute psychologist as well as an ace hairdresser — rarely gives such thumping endorsements.

Well, with dangerous weapons so near my head, I couldn’t risk insulting the man by saying no, could I?

The tome had a quirky title: Who Ordered This Truckload of Dung? I scanned the bio briefly: the author Ajahn Brahm was as beloved for his humorous stories as he was for his uplifting teachings. Trying not to make my disdain too obvious, I began flipping the pages suspiciously.

(Brahm was born Peter Betts in London in 1951, and ordained in Bangkok at the age of 23. He is the Abbot of Bodhinyana Monastery in Serpentine, Western Australia. )

By the time my haircut was over, I had already devoured half the book, racked by laughter and tears.

So when a friend told me the venerable teacher would be in town for a seminar, I wasted no time in registering, and even talked two sceptical friends into coming along for the party.

The venue: the air-conditioned auditorium of one SRJK Chee Wen, Subang Jaya. The date: Feb 22.

By now, I had done enough reading up to know his talks were popular but the huge turnout — it was full house on a balmy Sunday afternoon — took me by surprise. What, precisely, was his X-factor?

A short intro later, Ajahn Brahm leaped out of the pages onto stage in his wrinkly brown robes, wearing that familiar impish grin that seemed photocopied from the book.

His subsequent summary of himself was certainly different from the glowing tribute which prefaced his appearance.

“I became a monk after my girlfriend dumped me. If she hadn’t done that, I would be married with a mortgage and four kids who give me a lot of trouble. If I ever meet her again, I must say thank you for getting rid of me!”

In describing one of his earliest challenges — mosquitoes in the Thai forest where he studied meditation — he deadpanned, “Do you know that mosquitoes have been trained to recognise that men in brown robes make a better dinner?

“This is why 1) they know that we cannot swat them, 2) because we are bald, they have more landing space. When they see a monk, they think to themselves, ‘Oh here’s a restaurant with more seats!’

“And 3) they make a beeline for Western monks because . . . they rarely see Western monks in this part of the world. Humans like to try new things, and it is no different with mosquitoes. They also want to have . . . Western food!”

My jaw dropped several times. Where was the holier-than-thou man of God I’d half-expected?

By the time we drove out of the school a marathon seven hours later, we were exhausted. My jaws ached from laughing too much, and my head, curiously heavy yet light-headed.

All he had done the entire session was tell stories, yet those simple, humorous tales had stirred in me more than any other experience in recent memory.

I wondered how it went down with my friends, darting a fearful glance at the two companions whom I had arm-wrestled into coming.

“He’s so down-to-earth . . . the way he responded to that guy about bald heads . . .” They burst into renewed giggles.

During the Question and Answer session, some smarty pants asked: “Why do monks have bald heads?”

Without missing a beat, Ajahn Brahm quipped: “Because otherwise they would tear all their hair out answering questions like these!”

Ever the gentleman, he followed with a considered, sober answer despite knowing full well — as the audience did — that the question was some heckler’s attempt to test his Venerable One’s ability to think on his feet.

I had come to the talk prepared for his wit. What I didn’t expect was his bracing, almost unsettling, honesty.

A very down-to-earth, sensible, yet non-judgmental statement that he prefaced with a somewhat shocking admission: before he joined the monastery, he was no angel himself. He had had his share of romantic relationships and could have just as easily become a father by accident, as an ascetic.

“It’s almost like he’s one of us,” Maria marvelled.

Perhaps that was the secret behind Ajahn Brahm’s broad appeal. He understood the fundamentals of imparting wisdom. It was not about sitting on your high horse, celestial or otherwise, and dispensing advice like you’re better than everyone else, but about honest sharing and relating.

Remarkably, for someone so accomplished, he was never patronising or sanctimonious. (He won a scholarship to study Theoretical Physics at Cambridge in the late 1960s.) On the contrary, he poked fun at himself whenever the opportunity presented itself.

He admitted cheerfully, “One character flaw I can’t change is that I like to crack silly jokes.”

I ran my fingers reverently over the brown-shaded book I had purchased from the sales counter, and turned it over.

“It would fall apart from your attention,” an enthusiastic book reviewer raved.

If my already dog-eared book of just one month is any indication, a truer blurb was never writ.