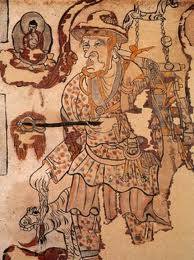 The exact day and month of his arrival in the island is not known but the year, according to Chinese records, is 410 AD. – four years after Bhikku Dhammayana took the first Buddha statue from Sri Lanka to China.

The Sri Lanka-China Society jointly with the Chinese Embassy have organised special religious events this Vesak month at Anuradhapura in memory of Ven. Fa-hsian’s visit.

In a commemorative lecture on the event, Senior Lecturer, Sabaragamuwa University Dr. Hao Weimin said that the key aspects of the age-old ties between his country and Sri Lanka were the Silk Road and Buddhism. He was speaking in Sinhala on ‘China-Sri Lanka Historical relations: An Overview,’ at the Royal Asiatic Society auditorium at the Mahaweli Centre, Colombo. Dr. Weimin’s own parents were born close to Ven. Fa-hsian’s birth place in the Yellow River Valley in China’s Shanxi Province. Fa-hsian’s original name was Kung. Admitted to the Buddhist Order at the age of three he was given the religious name Fa-hsien which means Law Manifest.

Dr. Weimin observes that Fa-hsian’s A Record of the Buddhist Countries, (also known as The Travels of Fa-hsian) carries some invaluable historical information on Sri Lanka not found in the Sinhala Chronicle Mahavamsa. The most noteworthy of these is the vivid description of the ceremonies connected with the exposition, procession conveying the Sacred Relic of the Buddha from the then King Mahanama’s Palace to the Abhayagiri Vihara and also of Anuradhapura city, the King and the people Anuradhapura at the time was a well-planned, beautiful city.

Fa-hsian’s travel record - which gives a complete description of his journey - is the earliest comprehensive account the world has of the customs, geography and history of Central Asia, the Indian subcontinent and the Indian Ocean. A Record of the Buddhist Countries has been published in over 20 official and private editions since the Sung Dynasty. This well-known Chinese classic is comparable to the later Record of The Western Regions by Bhikku Xuan Zang (also known as Heung Tsang) of the Tang Dynasty.

According to Chinese chronicles Buddhism proper was introduced to China during the reign of Emperor Ming (58-75 AD) of the later Han Dynasty. During the second Century more bhikkus arrived in China from India and other countries. The flourishing caravan trade at that time greatly helped the spread of Buddhism.

Most of the early Buddhist canons which reached China came from Central Asian Kingdoms and not directly from India, many though Chinese Turkistan by way of Khotari on the South route, or Kuch on the North route. However the Buddhist cannons brought to China during this period could not satisfy the needs of Chinese bhikkus, who wanted to make thorough study of Buddhism.

This was one of the two reasons why Chinese Buddhists risked their lives and endured great hardships to make the journey to the Indian subcontinent in search of more Buddhist texts and sutras. The other was the rapid growth of Buddhism in China at the time. The number of monks had risen and monasteries were growing causing an urgent need for better monastic rules. This was Fa-hsian' main purpose in traveling Westwards whereas other Chinese monks who journeyed before him in search of Buddhist texts had gone no further than North India. When Fa-hsian went there, he found that the monks handed down the precepts orally and had no written records. So he pressed on to Central India to obtain monastic rules.

The significant feature of the travels in Asia of the Chinese bhikkus Fa-hsian and Xuan Zang was that they were not adventurers but humble pilgrims in contrast to many European explorers like Columbus who were hell bent on conquest, exploitation and forced conversions. Fa-hsian and Heung Tsang dedicated their lives to strengthening ties between their country and the rest of Asia through faith by example, not compulsion. Chinese believed that the Buddha Dhamma in its original form was found only in Sri Lanka.

Fa-hsian set out from Changan in China in 399 AD at the age of 65 on a 14-year odyssey with eight or nine fellow monks, who soon found themselves in the trackless Gobi wastes, where even today high-powered vehicles and modern communications can hardly guarantee safe passage. So not surprisingly, one member of the team died of thirst. He crossed the deserts and the Pamir Plateau, traveled through the North, Central and East India, down to South India, Sri Lanka and Sumatra before returning to China by sea in 413 AD.

During his two year period in Sri Lanka Fa-hsian stayed in Abhayagiri which was a vast monastic complex where every third month of the year the Sacred Tooth Relic was exhibited for 90 days for the public to pay homage. Today it is the site of the Mahatissa Fa-xian Cultural Complex which also houses a museum (to house the artefacts found during the excavation). an information centre, a book stall, a storehouse for archaeological finds and a record room and residential quarters for bhikkus built according to the ancient plan of five-unit complex as found at Abhayagiri. The cultural complex is in fact a gift from China to Sri Lanka.

Fa-hsian's special attention was drawn to the Buddhist literature associated with the Vinaya Pitaka which laid down the rules for bhikkus. Before he departed he obtained copies of the Sanskirt texts, Mahisasakas, Dirgagama, Samyuktagama and Sannipata all of which were unknown in China.

Fa-hsian had been away from China for many years and associated only with people of foreign lands. All the mountains, rivers, plants and trees he saw were strange to him. Moreover his companions had left him, some had remained behind and others died. Looking at his lonely shadow, he was often filed with sadness.

After leaving Sri Lanka by ship in pirate-infested seas and braving a hurricane that lasted 13 days Fa-hsian reached Sumatra (then known as Yavadvipa). On his return journey to China from Sumatra on board a Kwangchow-bound merchant ship, they were caught in another heavy storm that nearly sank the vessel.

Among the passengers were a number of Brahmin merchants who imagined that Fa-hsian being a Buddhist monk was the cause of ill-luck and decided that they should put him ashore. But Fa-hsian’s patron reacted strongly to this attempt by threatening to report them to the Chinese Emperor if they dared to do so. This threat made the troublemakers hesitate and the monk was able to reach home with copies of valuable Buddhist texts not found in China at the time.

On his return to China, he was so eager to translate these documents as quickly as possible that instead of going to Changan to rejoin his former teachers and companions as he had first intended, he went to Chienkang (Nanjing) where he translated the sutras with the help of the Indian monk Buddhabhandra. Fa-hsian was 79 by the time he finally made his way back to China. In 414 AD the year after his return to Chienkang, he wrote the record of his travels; and later, by request .added certain material to make the version which we have today. (From the Foreword by Ho Chang-chun to the English translation of A Record of the Buddhist Countries published by The Chinese Buddhist Association, Beijing 1957)

In a postscript by another Chinese monk, Fa-hsian is quoted as saying,

“When I look back on what I have been through my heart begins to pound and I start to sweat. I risked all those dangers with no thought for myself, because I had a fixed purpose and - simple as I am - was single-minded. That was why I embarked upon a journey in which death seemed almost certain, and had one chance only in ten thousand of surviving.”

Dr. Weimin said that Fa-hsian’s writings and those of Xuan Zang as well as other ancient Chinese records referred to Sri Lanka as the land of Sinhalas. The different Chinese names Shizi guo, Sit Tio, Si Tiao, She Tiao, Seng-Kia-lo denoted the same meaning – Simhala, Sinhaladipa or Kingdom of the Lions. (Xuan Zang’s plan to visit Sri Lanka in 638 AD did not succeed due to internal strife in the island at the time)

Dr. Weimin made a special reference to the period that saw momentous turn of events in 433 AD when a Sinhala ship-owner called Nandi took with him eight Theravada bhikkunis from Sri Lanka to China.

These nuns led by Ayya Sara (Devasara) established the Order of the Buddhist Nuns in that country where it survives to this day continuing the same Higher Order introduced to Sri Lanka in the 3rd Century by the Arahant Bhikkuni Sanghamitta.

According to Dr. Weimin the biggest ships that called at Chinese Ports during this period were from Sri Lanka, proving the marine engineering skills of the ancient Sinhalas.

Today when the two countries enjoy the best of relationships it is vital that the Sri Lankan-Chinese cultural – religious connection be well-maintained for the benefit of future generations.