Zen and the art of saving the planet

He has set up an eco-friendly village and is a best-selling author. Tomorrow, this green crusader will fill the Hammersmith Apollo with fans. But Thich Nhat Hanh is no rock star – he's a Zen master. Nick Harding meets a monk on a mission

Paris, France -- As a vision of the future, the community of Plum Village in the French wine region of the Dordogne doesn't conform to stereotype. It doesn't bristle with technology, scientific endeavour and cutting-edge innovation. It is austere, tranquil and basic, and it is inhabited by brown-robed monks. 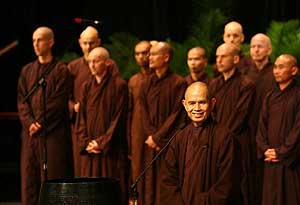 Yet this co-operative of three hamlets that includes fruit orchards, vegetable gardens, dormitories, temples and meditation halls is the headquarters of a monastic order that is at the forefront of a grassroots green movement, attracting increasing numbers of inquiries from people disaffected with modern living and looking for a greener, more sustainable future.

Plum Village is the headquarters of The Order of Interbeing, a Buddhist movement that is tapping into the post-financial meltdown zeitgeist and drawing hundreds of new devotees each year. At a time when most monastic orders are suffering a crisis of faith and dying out, the Order of Interbeing is expanding across the globe, broadcasting its underpinning ideology of sustainability and mindful consumption as it grows. And while the numbers of green-living monks in its monasteries increases, the order's outreach programme is connecting with tens of thousands of young people thanks to its internet presence and regular retreats.

At the helm of this movement is revered 84-year-old Vietnamese zen master, Thich Nhat Hanh, among the world's most influential Buddhist leaders. His contemporary Western Buddhist doctrine incorporates a strong environmental strand that has made him an unlikely poster boy for the green movement. He has a CV many world leaders would be envious of. He was instrumental in mobilising the peace movement against the Vietnam War and has inspired environmentalists such as Joanna Macy and Alan Weisman. His teachings on the environment have influenced the Prince of Wales, and the Dalai Lama and Oprah Winfrey are admirers. His book on ecology, The World We Have, is a best-seller and tomorrow he is making a rare visit to the UK to give a talk at London's Hammersmith Apollo.

The environmental principles of his doctrine teach respect and compassion for the environment through a code of practice called the five mindfulness trainings. Rooted in Buddhist tradition, this system of behaviour represents a vision of global spirituality and ethics. Devotees are encouraged to adopt and practise these in everyday life. The system encourages followers to take responsibility for their actions and to consider carefully the consequences of their consumption, not only of food and material goods, but also of culture and sensory stimuli. Thich Nhat Hanh says the wrong type of media is toxic and promotes wrongful consumption, which in turn is bad for the individual and the planet. In The World We Have he writes: "The situation the Earth is in today has been created by unmindful production and unmindful consumption. We consume to forget our worries and our anxieties. Tranquilising ourselves with over-consumption is not the way."

In common with James Lovelock's popular Gaia theory, Buddhists believe the Earth is a living organism of which we are all a part and are all interdependent. Thich Nhat Hanh teaches that if we harm the environment, we harm ourselves. The message is simple but effective – consume with compassion. To do this, devotees are encouraged to practice regular silent contemplation and to punctuate their day with meditation, during which they bring themselves to the present moment to contemplate life and focus on the implications of their actions. All meals at Plum Village are eaten in silence, and diners are encouraged to consider each mouthful carefully, reflecting on the amount of food they eat, the provenance of it and the ethical implications of consuming it. The effect of this exercise, when done in the belief that every organism is part of a singular whole, is profound and is the reason why Plum Village monks eat a vegan diet.

In a rare interview, Thich Nhat Hanh says: "Unesco reports that every day 40,000 children die because they do not have enough food. Meanwhile many of us eat a lot of meat and drink a lot of alcohol. In order to make a piece of meat you have to use a lot of cereal and grain and that grain could be used to feed dying children. So eating that meat is akin to eating the flesh of your own son. We should eat in such a way that conserves our compassion."

While his vegan dietary advice may not resound with everyone, his clarion call for a return to a more simplistic way of life has struck a chord with many. In the last few years the Plum Village community has grown from 100 monastic disciples in France and America to more than 600 across the world, with monasteries in Germany, Australia, Thailand, Indonesia and Hong Kong. The average age of new recruits is 22. Increasingly the message of simple living is being accessed by the young. The order's outreach programme for young people, Wake Up – Young Buddhists and non-Buddhists for a Healthy and Compassionate Society, runs programmes around the globe and its theme tune has been downloaded from the internet by more than 40,000 fans.

Thich Nhat Hanh acknowledges the increasingly important role young people play in the green movement. He says: "The future belongs to the young and if they wake up early, for the sake of everyone on the planet, that is a good thing. Young people are more free, they are not bound by so many things." While some may argue that living according to his trainings is difficult in modern society and that his doctrine presents an unattainable idealism, the message of appreciating simple pleasures and freedom from attachment to material goods has become increasingly relevant during the credit crunch. Since the economic downturn, Plum Village has received more inquiries about the retreats it hosts.

Thich Nhat Hanh says: "Yes, we have to earn a living, but it is possible to earn a living according to the five trainings and to be content. If you have a salary that is not as high as others, if you have to live in a smaller house and have a more humble car, you can live according to the noble path and you can laugh, you can love. If you live with compassion then your life is a happy life. Simple living is possible. I know of many rich businessmen who live simply, they eat simply and their joy comes from knowing they are allowing many people to have jobs and that they are not damaging the planet by conducting their business."

At 84, Thich Nhat Hanh maintains a sharpness of mind that allows him to deliver many hours of insightful theological musing without notes. He takes a keen interest in the contemporary and has continued to engage with world leaders despite sometimes failing physical health. He does not shy from controversy and, during an address to Congress soon after 9/11, he criticised US foreign policy for a rise in the level of global violence. About the oil spill in the Gulf of Mexico he says: "There are businessmen who have been doing destructive things to the planet and they want to feel less guilty so they donate money for compensation. That is not enough. They have to reconsider and examine their actions."

Thich Nhat Hanh became an activist when he opposed the South Vietnamese government during the Vietnam War and dodged bullets in the jungle to bring aid to bombed villagers. His opposition to that conflict led to him being exiled from his homeland for 40 years. His peace work influenced civil rights leader Martin Luther King, who subsequently nominated him for the Nobel Peace prize. In the Seventies, when a tide of Vietnamese and Cambodian refugees took to dangerously overcrowded boats to flee persecution, Thich Nhat Hanh spent months traversing the South China Sea saving lives. He is a vocal critic of the wars in Iraq and Afghanistan and his monks hold reconciliation retreats for Israelis and Palestinians at Plum Village. When he was finally allowed back into Vietnam in 2005, thousands attended the retreats he held there and so many followers joined his order, the communist government instituted a crackdown, fearful of his influence. Many of those persecuted monks fled the country or now live in hiding.

After his London appearance he will hold a week-long retreat in the Midlands, where 500 people, including children and families, will be able to experience his blend of environmental spiritualism.

"People are getting busier and busier. We are like fishes living in a place where water is lacking. We don't feel comfortable, we don't have space, we lack time. We may have more money than in the past but we have less space and less happiness and less love. So we should have a revolution which must start with a collective awakening. We have to stop and look for another direction."

Ultimately, the impassioned humanist and wise sage believes we can still salvage our ailing planet.

"It is possible for us to be something and to do something now, don't despair. There is something we can all do. There is still is a chance. Recognise that and do it and you will find peace. Don't allow yourself to be carried away by despair." His eyes flash with passion as he speaks and you can't help but believe and hope that maybe he is right.

For more information about Thich Nhat Hanh go to www.mindfulnessretreats.org.uk