Sonoma Valley, CA (USA) -- We awoke the morning after to find the forest filled with and pervaded by joy. It was a day of joy.

On August 29th, our Dhammadharini support foundation celebrated its five year anniversary with the full ordination of four women novices at our Aranya Bodhi Hermitage.

It was wonderful to have so many dear friends in Dhamma gathered together on in the heart of our forest hermitage, and the hall and whole area was decorated and adorned by Deva Flower's friends Sumana and Apple. Amidst the chanting of "Sadhu, sadhu, sadhu," flower petals were sprinkled upon the long line of processing monastics and candidates as the gong was rung and they silently walked up the road to the ordination platform between rows of friends and family.

Ven Suvijjana had her samaneri pabbaja on the mountain saddle adjacent to the Awakening Forest just over two years before, and has been training with Ayya Tathaaloka at Dhammadharini Vihara, the Bodhi House and at the hermitage for the past four years. Ven Adhimutta was ordained a novice by Ayya Tathaaloka even before that in Australia at Santi Forest Monastery where she trained under the tutelage of Bhante Sujato.

Ven Phalanyani has trained as a nun in Thailand with Ajahn Suphan and Ajahn Noah at Wat Ram Peong and ordained as a samaneri with Ayya Tathaaloka at our hermitage. Ven Thanasanti had been a samaneri for the very longest time, having her pabbaja with the venerable Ajahn Sumedho in England nineteen years ago.

Venerable elder bhikkhunis Ayya Gunasari and Ayya Satima traveled from the Mahapajapati Women's Monastery in the Mohave Desert and from the Minnesota Buddhist Vihara, and Ven Madika came from the Great Determination Hermitage in Ohio to fulfill the quorum for the ordaining Bhikkhuni Sangha. Ayya Sudhamma and Ayya Sobhana, both of whom trained at the Bhavana Society with Bhante G (and thus have excellent Pali-language pronounciation) served as the Kammavacacarinis or Chanting Acaryas for the ordination. Ayya Tathaaloka Theri, having surpassed 12 vassas since her own bhikkhuni ordination, was appointed by the Bhikkhuni Sangha as the Pavattini or Preceptor for the ordination of her students.

One by one, all four women were ordained on one side by the Bhikkhuni Sangha, while friends and family members bore witness together sitting outside our sima ordination platform.

After being ordained by the Bhikkhuni Sangha, the four one-sided bhikkhunis then went over to the assembled Bhikkhu Sangha for the confirmation of their ordination which completes the bhikkhuni upasampada. 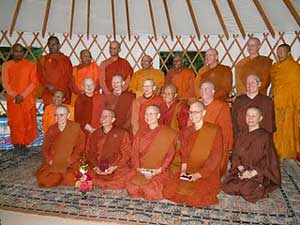 Bhante Henepola Gunaratana, founding abbot of the Bhavana Society and legendary Dhamma teacher, was the senior bhikkhu present and served as the Ovadaka Acarya, which means that he had the honor of giving the new bhikkhunis their very first Dhamma teaching directly after their ordination. The abbots of American Buddhist Seminary Temple in Sacramento and Buddhi Vihara in Santa Clara together served as the bhikkhu Kammavacacaryas or Masters of the Chanting. Venerable Ajahn Pasanno, abbot of Abhayagiri Buddhist Monastery, Bhante Pannasara, Bhante Punnananda, Ajahn Yatiko, Bhante Wimalaratana and Ven Varanyano Bhikkhu more than filled the quorum for the Bhikkhu Sangha completing the ordination.

Bhante G gave a beautiful Dhamma talk on the special meaning of a buddha being born in the world, and on his own dedication to women's ordination in his 60 plus years of monastic life. He spoke of how glad he was that two of his students, venerable Ayyas Sudhamma and Sobhana had served as Acaryas for such an important and historical occasion.

Ven Bhikkhu Bodhi had recorded Dhamma words of Anumodana on video to be shared with everyone as well in his absence that was not able to be uploaded, but fortunately all the bhikkhunis were able to hear it from him live via Skype.

After the ordination, friends had prepared many trays to offer Sanghadana to the entire Ubhato Sangha - the word the Buddha used for the highest blessing of the complete Bhikkhu and Bhikkhuni Sangha together. Sylvia Boorstien offered a beautiful large standing Kwan Yin image from the Spirit Rock community together with a yurt heating system, and Kerstin Hall of Padmasambhava Peace Institute offered a Tibetan prayer wheel that turns powered by solar panels! These were wonderful gifts for an off the grid women's monastic hermitage.

And after the Sanghadana, the entire Sangha, including bhikkhus and bhikkhunis, siladharas and anagarikas -- and most importantly new bhikkhunis -- all chanted traditional Pali verses of blessing together led by Bhante G.

It was a beautiful and joyful day, with so much mudita so strongly pervasive at time that it seemed the air was alive and fragranced by this quality. One friend reported feeling tsunamis of joy. Other friends mentioned that it felt like a deep healing, the turning of a bend, and coming out into the clear and wide open way of the Buddha's.

And joy filled the forest and resounded through it, from the tops of the mountain trees, deep into the silent redwood fairy rings, and down to the flowing waters of the creek, out to the ocean.

-------
Awakening Forest Hermitage is a rustic, "off the grid" Theravadin Buddhist women's monastic hermitage on more than 100 acres of mountain forest and meadows, pools and waterfalls on the Northern California Sonoma Coast. Aranya Bodhi is the monastic hermitage/retreat project of Dhammadharini, a religious non-profit organization in the State of California. Contact the hermitage by Skype at "Aranya_Bodhi" or email: AwakeningForest@gmail.com. Main website: www.aranyabodhi.org.