Zen and the art of protecting the planet

In a rare interview, zen buddhist master Thich Nhat Hahn warns of the threat to civilisation from climate change and the spiritual revival that is needed to avert catastrophe

Nottinghamshire, UK -- It is not exactly a traditional Sunday stroll in the English countryside as 84-year-old Vietnamese zen master Thich Nhat Hanh leads nearly a thousand people through the rolling Nottinghamshire hills in walking meditation. 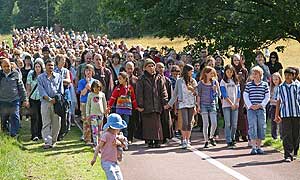 The silent procession takes on the shape of a snake as it wends its way extremely slowly through a forest glade and an apple orchard. The assembled throng are asked to deeply experience each step they take on the earth in order to be mindful in the present moment.

Thay, as he is known, steps off the path into a field of tall grass and sits quietly in meditation. He exudes a sense of serenity, born of his 68 years' practice as a monk.

Despite having hundreds of thousands of followers around the world and being viewed with the same reverence as the Dalai Lama, Thay is little known to the general public. He has chosen to shun the limelight and avoid the shimmer of celebrity endorsement in order to focus on building communities around the world that can demonstrate his ethical approach to life. There are monasteries in France, America and Germany as well as groups of supporters that meet all over the world, including more than 20 "sanghas" across the UK.

He is seeking to create a spiritual revival that replaces our consumption-based lives with a return to a simpler, kinder world based on deep respect for each other and the environment.He rarely gives interviews but recognises that the enormous challenges facing the world, combined with his own increasing age and frailty, means it is important to use what time and energy he has left to contribute what he can to re-energising society and protecting the planet.

For a man of his age, Thay keeps to a punishing schedule. After having lectured to thousands at London's Hammersmith Apollo, Thay has come to Nottingham for a five day retreat, then goes on to a three month tour of Asia, before returning for a winter retreat at his Plum Village community in France, where he has lived in exile for more than 40 years.

Thay, a prolific author with more than 85 titles under his belt, has taken a particular interest in climate change and recently published the best-selling book 'The World We Have – A Buddhist approach to peace and ecology.'

Tranquilising ourselves with over-consumption

In it, he writes: "The situation the Earth is in today has been created by unmindful production and unmindful consumption. We consume to forget our worries and our anxieties. Tranquilising ourselves with over-consumption is not the way."

In his only interview in the UK, Thay calls on journalists to play their part in preventing the destruction of our civilisation and calls on corporations to move away from their focus on profits to the wellbeing of society.

He says that it is an ill-conceived idea that the solution to global warming lies in technological advances. While science is important, even more so is dealing with the root cause of our destructive behaviour: "The spiritual crisis of the West is the cause for the many sufferings we encounter. Because of our dualistic thinking that god and the kingdom of god is outside of us and in the future - we don't know that god's true nature is in every one of us. So we need to put god back into the right place, within ourselves. It is like when the wave knows that water is not outside of her.

"Everything we touch in our daily lives, including our body, is a miracle. By putting the kingdom of god in the right place, it shows us it is possible to live happily right here, right now. If we wake up to this, we do not have to run after the things we believe are crucial to our happiness like fame, power and sex. If we stop creating despair and anger, we make the atmosphere healthy again.

"Maybe we have enough technology to save the planet but it is not enough because the people are not ready. This is why we need to focus on the other side of the problem, the pollution of the environment not in terms of carbon dioxide but the toxic atmosphere in which we live; so many people getting sick, many children facing violence and despair and committing suicide.

"We should speak more of spiritual pollution. When we sit together and listen to the sound of the [meditation] bell at this retreat, we calm our body and mind. We produce a very powerful and peaceful energy that can penetrate in every one of us. So, conversely, the same thing is true with the collective energy of fear, anger and despair. We create an atmosphere and environment that is destructive to all of us. We don't think enough about that, we only think about the physical environment.

"Our way of life, our style of living, is the cause of it. We are looking for happiness and running after it in such a way that creates anger, fear and discrimination. So when you attend a retreat you have a chance to look at the deep roots of this pollution of the collective energy that is unwholesome.

"How can we change the atmosphere to get the energy of healing and transformation for us and our children? When the children come to the retreat, they can relax because the adults are relaxed. Here together we create a good environment and that is a collective energy."

Capitalism as a disease

Thay talks about capitalism as a disease that has now spread throughout the world, carried on the winds of globalisation: "We have constructed a system we cannot control. It imposes itself on us, and we become its slaves and victims."

He sees those countries that are home to Buddhism, such as India, China, Thailand and Vietnam, seeking to go even beyond the consumerism of the West: "There is an attractiveness around science and technology so they have abandoned their values that have been the foundation of their spiritual life in the past," he says. "Because they follow western countries, they have already begun to suffer the same kind of suffering. The whole world crisis increases and globalisation is the seed of everything. They too have lost their non-dualistic view. There are Buddhists who think that Buddha is outside of them and available to them only after they die.

"In the past there were people who were not rich but contented with their living style, laughing and happy all day. But when the new rich people appear, people look at them and ask why don't have a life like that too, a beautiful house, car and garden and they abandon their values."

While Thay believes that change is possible, he has also come to accept the possibility that this civilisation may collapse. He refers to the spiritual principle that by truly letting go of the 'need' to save the planet from climate change, it can paradoxically help do just that.

The catastrophe to come

"Without collective awakening the catastrophe will come," he warns. "Civilisations have been destroyed many times and this civilisation is no different. It can be destroyed. We can think of time in terms of millions of years and life will resume little by little. The cosmos operates for us very urgently, but geological time is different.

"If you meditate on that, you will not go crazy. You accept that this civilisation could be abolished and life will begin later on after a few thousand years because that is something that has happened in the history of this planet. When you have peace in yourself and accept, then you are calm enough to do something, but if you are carried by despair there is no hope.

"It's like the person who is struck with cancer or Aids and they learn they have been given one year or six months to live. They suffer very much and fight. But if they come to accept that they will die and they prepare to live every day peacefully and they enjoy every moment, the situation may change and the illness may go away. That has happened to many people."

Thay says that the communities his Order of Interbeing is building around the world are intended to show that it is possible to "live simply and happily, having the time to love and help other people.

That is why we believe that if there are communities of people like that in the world, we will demonstrate to the people and bring about an awakening so that people will abandon their course of comforts. If we can produce a collective awakening we can solve the problem of global warming. Together we have to provoke that type of awakening."

'One Buddha is not enough'

He stops for a moment and goes quiet: "One Buddha is not enough, we need to have many Buddhas."

Thay has lived an extraordinary life. During the Vietnam War he was nearly killed several times helping villagers suffering from the effects of bombing. When visiting America, he persuaded Martin Luther King to oppose the war publicly, and so helped to galvanize the peace movement. In fact King nominated him for the Nobel Peace Prize in 1968.

In the following decade Thay spent months on the South China Sea seeking to save Vietnamese and Cambodian refugees from overcrowded boats and, in more recent years, he led members of the US Congress through a two-day retreat and continues to hold reconciliation retreats for Israelis and Palestinians at Plum Village.

His whole philosophy is based on watching the breath and walking meditation to stay in the present moment rather than dwelling on the past or worrying about the future.

He says that within every person are the seeds of love, compassion and understanding as well as the seeds of anger, hatred and discrimination. Our experience of life depends on which seeds we choose to water.

To help the creation of a new global ethic and sustain those positive seeds, Thay's Order of Interbeing has distilled the Buddha's teachings on the Four Noble Truths and the Noble Eightfold Path into five core principles.

The Five Mindfulness Trainings, updated in the last year to make them relevant to our fast changing world, are not a set of rules but a direction to head in. Beyond calling for mindful consumption, they encourage an end to sexual misconduct as well as a determination "not to gamble, or to use alcohol, drugs or any other products which contain toxins, such as certain websites, electronic games, TV programmes, films, magazines, books and conversations."