Seoul, South Korea -- As more people lay their hands on smartphones these days, various religious organizations are also jumping on the bandwagon to use them as a channel to reach out to believers in a more effective and easier way: through smartphone applications and even Twitter. 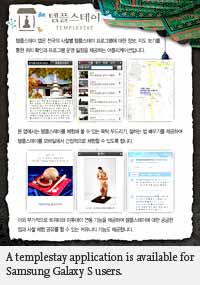 The Protestant Church is leading the way, being one of the first religions to enter the application race, with a variety of offerings including the Bible, church schedules, hymns, Contemporary Christian Music (CCM) airings and daily news. Such applications have gained in popularity as convenient channels in sharing information, faith and to further spread Christianity to others.

Kim Tae-yeon, a priest who runs a Twitter broadcaster, says that “the reason why we use Twitter is because we want to build a good relationship with non-believers and also communicate in an easier way.”

Through Twitter, Kim shares his faith and also holds special off-line events that anybody can participate in. Instead of trying to beckon people to come to church in the streets or through loudspeakers, a simple “tweet” can spread all the information needed to fellow followers.

In the Buddhist world, developments of such applications are a bit behind its counterparts. Buddhist scriptures including the Geumganggyeong (Diamond Sutra) have been made into applications, but the religion still has a long way to go to come up with other useful and effective programs for smartphones.

The Cultural Corps of the Jogye Order of Korean Buddhism recently launched its first smartphone application called the “Templestay application.”

The project was made to introduce templestay, its programs and also about some 100 temples that offer the program. The application also offers interesting stimulated experiences, including ringing the “moktak,” or the wooden percussion instrument used during rituals, and also instructions on how to carry out certain Buddhist routines such as the 108-bow ceremony.

Meanwhile, Won Buddhism has a unique application called the “Won Diary.” The program basically works as a check list where the user can write in anything they think they should accomplish, and control their mind and soul by checking if they really did carry out their promises. From dieting, communicating with family members to even quitting smoking, the diary can be used by anybody for the sole purpose of mind control.

With more colorful applications under way, the religious sect is expected to get busier creating new, effective and creative programs and also manage to attract more faithful believers along the way.