PORTLAND, Maine (USA) -- Monks certainly have no problem with clutter. 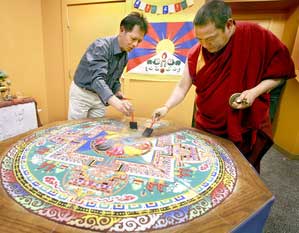 That's one lesson, and a rather simplistic one at that, to be drawn from Sunday's ceremony culminating the weeklong creation of an elaborate sand mandala by a Tibetan Buddhist monk and a trained mandala master.

Geshe Gendun Gyatso and Sonam Dhargye worked 11-hour days Monday through Friday at the Maine College of Art on Congress Street, painstakingly arranging grains of colored sand into a circular design that included spiritual motifs. They often took breaks to pray over the work of art, laid out over a knee-high octagonal table.

On Sunday afternoon, Gyatso spoke about their mandala of compassion to about four dozen guests, about its symbolic nature and the impermanent nature of life as well as the benefits of kindness and compassion -- "better than taking diet supplements," he said.

He asked onlookers to join him in prayer. They dutifully clasped palms together, fingertips up, as the berobed Gyatso and Dhargye, a former monk dressed in khaki pants and a charcoal-gray dress shirt, interspersed ritual chants with the ringing of a bell. Jazz played softly in the background.

Gyatso pulled out a small metal tool called a vajra and, after Dhargye beckoned with an unlit incense stick, scraped a line through the sand as if he were in the kitchen of a pizza parlor, cutting up a pie into equal slices. The ritualistic dismantling continued as Gyatso brushed the colored sand to the middle of the table, revealing the mandala's geometric underpinnings of blueprint-like chalk lines.

Within moments, a thing of exquisite beauty had been rendered into a pile of colored sand.

"It's kind of sad," said Joan Uraneck of the Maine College of Art, who is studying to be a chaplain. "I didn't want them to do it, but I think that's part of what he's talking about: the building and the destroying, life and death, they're all in the same package."

Using his fingers, the monk transferred the sand into a vase and planted the vase on the remaining pile. More prayers. Finally, the monk scooped sand into plastic snack bags for each of the onlookers, scooped the rest of the sand into the vase, and off everybody went down the stairs at MECA and out onto Congress Street for a monk-led parade, past the fire station on Pearl Street to the Maine State Pier.

Once at pier's end, Gyatso and Dhargye laid out the bell, vajra and vase upon a woven brocade of orange and red with gold thread. They sat facing the oil tanks across Portland Harbor and engaged in more sing-song chants and prayers before Gyatso tipped the sand into the outgoing tide, returning the colored granules -- now infused with prayers of compassion -- back to the sea.

"The purpose," said Lorraine Kardash, who hosts the Healing Dharma Center North in South Portland, where Gyatso teaches three times a month, "is to generate compassion and peace in the whole world."

The monk, who splits his time between Boston and India, said the weeklong ritual of compassion can serve as an antidote of sorts for "people seeing bloodshed and war on the front page of the newspaper."

"This is a little break for everybody," he said. "We bring thought and peace together."

Vase empty, sand returned to the sea, he turned and walked back along the brick sidewalks of the Old Port to the College of Art.