A monastery grows in Brooklyn

New York, USA -- Three orange-robed Burmese Buddhist monks have made their home in Bedford-Stuyvesant for nearly a year, and are gradually adapting to life in Brooklyn. 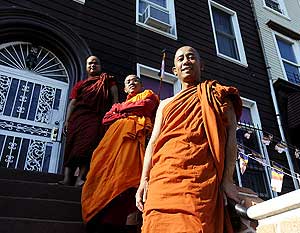 << U Pyinya Zawta, U Agga Nyana and U Gawsita outside their Bed-Stuy home. The three monks are adjusting to life gradually in the borough.
Linda Rosier/News

Their Madison St. digs, decorated with bright Burmese flag banners hung over the stoop, stand out from the desolate, boarded-up homes nearby.

There are other positives: living in Brooklyn means they can finally speak out. One of the monks was tortured and jailed for a decade by his homeland's current military regime.

"Here in America, you have freedom, human rights, justice," said monk U Agga Nyana, 28. "In Burma, we don't have any rights to express our view."

Life in their new land has been hard at times; New York winters are harsh compared to the sweltering heat and humidity of their native southeast Asia.

But the monks have grown fond of such American grub as hamburgers and hot dogs. They sometimes even splurge for a Subway sandwich - a real treat compared to Burmese meals which typically cost less than the equivalent of a dollar.

The high cost of New York living is daunting, said U Pyinya Zawta, 50. At home, Buddhist residents support monks through daily alms. The Brooklyn monks are forced to depend on welfare and on donations from people they meet speaking at college campuses.

Local teens sometimes tease the monks about their maroon robes, but overall, Bed-Stuy has been welcoming, they said.

"They're like everybody else," said Khaled Hourani, manager of a nearby Key Food supermarket. "I'm from the Middle East and sometimes I'll go out in the gowns."

The trio maintains close ties to home. U Pyinya uses Gmail's g-chat to talk with activists still in Burma. Hunched over his Sony laptop at a table in the monastery's kitchen, he mused about perhaps buying an iPad.

The monks adhere to a code of some 227 traditional rules, including strict vows against sex and theft. But they've also eased some for New York living - making an exception to the rule about no physical contact with women when shaking hands with female visitors to the monastery.

The trio escaped Burma - now officially called Myanmar - four years ago, first fleeing to Thailand, then Utica, N.Y. There, they helped make a documentary about their homeland's political upheaval called "Burma VJ," which won critical acclaim and an Oscar nomination.

"Sometimes communication is difficult because English isn't his first language, and it isn't mine either," said neighbor Gisela Sanders-Alcantara. "But Bed-Stuy is a changing neighborhood, and it's really great they're a part of it."