The 17th Karmapa, Ogyen Trinley Dorje, the Tibetan lama who, it has been widely speculated, will succeed the Dalai Lama as the figurehead for Tibetan Buddhism, will be travelling to Washington DC today, for a tour of the US.

New York, USA -- His arrival signals a significant shift by the Indian government, which has closely monitored and restricted the young lama's movements since he fled into exile from Tibet in 2000. 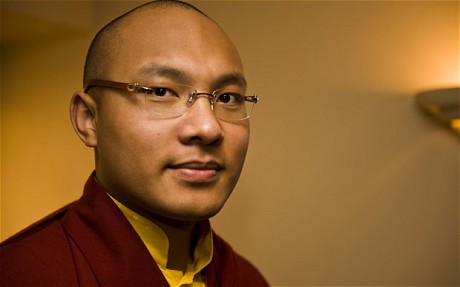 The 26-year old monk has been granted a travel permit to attend the Kalachakra ceremonies in the US, alongside the Dalai Lama.

The "Kalachakra for World Peace" ceremony began on Wednesday in Washington DC and will see 100,000 visitors take part in prayer, chanting, meditation and speeches.

While the Dalai Lama has renounced his political role as the de facto leader of the Tibetan community-in-exile, he remains the undisputed spiritual figurehead and moral force for Tibetan Buddhism. His death will leave a vacuum which it is widely expected that the Karmapa will fill.

Since arriving in India, following an epic 900 mile trek across the Himalayas, the Karmapa has been forbidden from travelling freely, the object of suspicions by the Indian intelligence services that he was a Chinese agent.

In 2008 he was allowed to leave India for the first time to visit America, where Michael Bloomberg feted him in New York by declaring the day of his arrival 'Karmapa Day'. But last year he was refused permission to travel to Europe, without any explanation being offered by the Indian government.

Earlier this year he became embroiled in further controversy following the discovery of large amounts of foreign currency in his monastery in Dharamsala, leading to a witch-hunt by sections of the Indian media.

It was subsequently established that the money was actually donations from devotees – a traditional practice in Tibetan Buddhism – earmarked for the purchase of land for a new monastery which had been tied up by India's complicated land laws.

The fact that he has been allowed to travel now is a further strong indication that the Indian government regard the spying allegations as baseless.

The young monk has been praised for his intelligence and personable approach, and his international profile is building steadily, with the Dalai Lama having chosen to take the Karmapa under his wing.

The Kalachakra ceremony is the first major public event the Dalai Lama has attended since his announcement in March that he is formally stepping down as the political leader of the Tibetan community in exile.

Robert Thurman, the American Buddhist writer and academic, and the Professor of Indo-Tibetan Buddhist Studies at Columbia University, told the Telegraph: "I am very happy His Holiness the 17th Karmapa is coming. It is a great happening that the Indian government is realising he deserves free travel permissions. His friendship and discipleship with His Holiness the Dalai Lama is of historic importance in the Tibetan world, deeply healing of a subtle division that is almost four hundred years old.

"He will be a great voice for the Buddha Dharma in the future, actually he already is, but not in any sort of missionary way, in the way of joining the worldwide network of spiritual leaders turning spirituality toward peace and not letting religion serve as a source of division within humanity in this time of the world crisis, environmental, economic, political.