A pilgrim at Kalachakra

Washington D.C., USA -- The Dalai Lama made remarks in both English and Tibetan on the opening day of the Kalachakra. Even though I don’t speak the language, I found myself equally engaged when he spoke Tibetan. As I watched him, I recalled seeing His Holiness link arms with George Bush a few years ago when he received the Congressional Gold Medal. 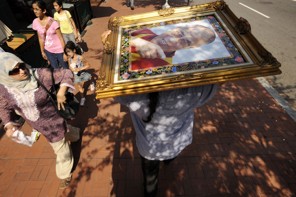 << Karma Namgyal of New York, NY carries a framed photograph of the Dalai Lama over his head as he walks on the sidewalk along F St. NW from the Verizon Center on his way to a bus on Wednesday July 6, 2011 in Washington, DC. The Dalai Lama is in town for the Kalachakra for World Peace 2011, which Namgyal attended on Wednesday. (Photo by Matt McClain/For The Washington Post) (Matt McClain - FOR THE WASHINGTON POST)

The President seemed stiff at first, caught off guard. But he warmed up soon enough. Within seconds Mr. Bush was walking arm in arm with the Dalai Lama and smiling as if they were old pals. Apart from the power of one man’s personality, I wonder why Buddhism appeals to Americans and what about it transcends the cultural barrier. Why are we warming up to it?

Buddhism teaches that impermanence is the way of the world. Suffering arises when we cling to the desire for things to remain just as we like them. From the smallest particle of matter to the largest bodies in the universe, everything changes. Our challenge is to find real happiness even in the midst of uncertainty. Is there any hope for us Americans? Can we learn that impermanence doesn’t just mean disposable water bottles?

Later in the afternoon, I’m careening through downtown traffic in a cab. Sitting next to me is Buddhist teacher and author, Sharon Salzberg. We’re on our way to tea at the hotel where she’s staying. The cab driver has picked us up in front of the Verizon Center. From the look of the crowd, he can tell it’s not his cup of tea. He’s been spewing judgments about the Dalai Lama since before the cab door even closed. As we round the corner, the driver is yelling, he’s a Communist! A Chinese Communist!

Sharon calmly assures the driver that His Holiness is neither Chinese nor a Communist. The driver self-identifies as Orthodox Christian and continues his lecture. He informs us that Buddhism is a godless religion that worships statues. He knows someone who is Chinese and worships a statue of Buddha. Just like that. Proof. He barks out opinions like he’s slamming down a shot glass after swallowing the last drop. Despite our attempts to provide context, he remains unconcerned with the difference between Tibetans and Chinese.

I look at Sharon, she smiles patiently. I am trying not to get triggered into defense mode, especially because Buddhism is not about convincing anyone that you are right and they are not. As I try to place his accent, I note with interest that he does not fit my stereotype of a Christian. I make one last attempt to break down barriers and introduce common ground. I lean over from the back seat and offer this: the Dalai Lama says that his religion is kindness... The driver pulls over abruptly and drops us off at the back entrance to the hotel. We’re puzzled. Why not the front? Is this the door reserved for heathens...?

As we sit down to tea, I reflect on how Buddhism is still a mystery to most people in the West. Sharon tells me about a recent experience where she faced considerable resistance if not outright hostility from someone who was interviewing her about her new book, Real Happiness. No doubt, a lot of education needs to happen. Even so, the sense of Buddhism as “other” is changing. Something is transcending and seeping into our collective Western mind. The Dalai Lama is a well-known figure, meditation and yoga classes are found in nearly every city and town, the image of the Buddha is prevalent, even trivialized in everyday objects from garden statues to blinged out cell phone covers. What’s the appeal?

On Thursday, Day 2 of the Kalachakra, I run into Yangdon Benara. She is a member of the Capitol Area Tibet Association. CATA, as they are known, are chiefly responsible for organizing this huge undertaking called the Kalachakra. Yangdon sits at a table selling tickets for a series of four Tibetan performances she has helped organize. The performances will take place over the next few days and are authentically Tibetan. They range from an opera about Milarepa, a famed Buddhist teacher, to contemporary Tibetan music performed by a new generation of ex-pats. That will be the loud stuff, says Yangdon. I know her to be someone who is dedicated to her community and helpful to non-Tibetans such as myself. I ask Yangdon why she thinks Buddhism is gaining a foothold in Western culture.

She thinks about it and gives me an answer. Those who are attracted to Buddhism, she says, are searching for a way to have a more meaningful life. As His Holiness says, materialism is not going to give you long lasting happiness. That stuff goes away. Real happiness is going to come from inner peace. Whether you’re a Buddhist or not, there are Buddhist methods that will help you develop that sense of peace. These methods include meditation, letting go of anger, letting go of judgements, cultivating compassion...being of service to others. Buddhist or not, people find these things to be of great value in their lives.

She warms to the topic and tells me that there was a special moment for her yesterday. His Holiness spoke in Tibetan, she says. Did you see it? He took off his cap and looked into the camera as if he were talking right to his people! I ask her to tell me what he said.

She looks away for a moment. He said this....I want to tell you that while you may not be free physically, what is important to remember is that you are free inside. She’s clearly moved as she remembers his words. You have inner freedom to live the best life you can. In Buddhist teachings you are taught to be of benefit to others, to practice compassion, but if circumstances hinder you...if you cannot do all that at once, then the least you can attempt is to do no harm. Start there and gradually work at becoming a better person. No matter who you are, you have control over how to live your life.

Yangdon’s eyes focus back on me. That, she says, is the most profound thing that a human being can hear. You have the ability to decide how you’re going to live your life, how you’re going to treat those around you. You are not dependent on external circumstances. Whether you’re in prison or living in a mansion, you can choose to live a better life. It’s all up to you. You have control over your inner self, she says, I think that is very appealing to Americans and other Westerners.