MANHATTAN, NY (USA) -- A Buddhist nun arrested while handing out prayer beads for donations to rebuild her burned down temple can finally get back to completing her mission. 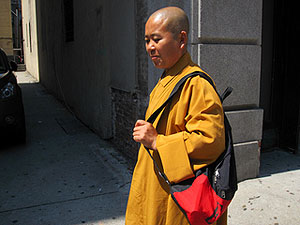 Prosecutors on Monday moved to dismiss charges against Baojing Li, 48, a spiritual leader whose Atlanta-area home and place of worship was badly damaged in a March fire.

Li came to Manhattan to solicit help from the city's large Chinese community and has been staying at an East Broadway house of worship since the fire. She was handing out 50-cent beads from China at Canal and Mott Streets when she was arrested on June 2.

Police from a Midtown task force assigned to crack down on unlicensed vendors spotted her and accused her of selling "costume jewelry." She was charged with a misdemeanor, a conviction which could have caused her immigration problems.

She was held at a Midtown precinct for several hours, her lawyer said.

Last week, prosecutors agreed to offer Li an "adjournment in contemplation of dismissal," a deal which effectively dismissed the charges at her brief court appearance on Monday. She was not required to do community service or pay any fee.

"If you stay out of trouble for the next six months, your case will be dismissed and sealed," Manhattan Criminal Court Judge Lynn Kotler said Monday.

After court, Li thanked her attorney, Robert Brown, who handled the case pro bono when he learned of her plight, and other community leaders who have helped her. She said, through a Mandarin interpreter, that she's relieved that the ordeal is over.

"I'm not nervous anymore," said Li, who donned a traditional Buddhist robe and had her head shaved.

Brown said the DA's office "did the right thing" and used its discretion appropriately in dismissing the charges.

On July 7, Li turned down an offer that would have required she plead guilty to disorderly conduct and perform one day of community service. She refused the deal, on the grounds that she'd done nothing illegal.

Brown said the arrest amounted to  cultural insensitivity and said "a Catholic nun in a habit handing out rosary beads" would not have been hassled by the police.

Since coming to New York, Li has raised $20,000, about half of which she received after her arrest received press attention. On Tuesday, she plans to catch a bus back to Georgia, where her temple was located, to begin the rebuilding process, her lawyer said.