PATASKALA, New Jersey (USA) -- Buddhist monks from as far away as Thailand and Arizona visited Pataskala on Thursday to participate in a ceremony they believe will bring good luck to a site proposed for a Thai Buddhist temple. 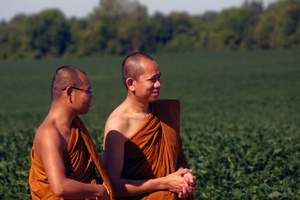 << Buddhist monks stand next to a soybean field that could become a Buddhist temple in the coming years.

The event, attended by close to two dozen supporters, took place on the edge of a knee-high soybean field on the south side of Blacks Road, in the area of Corylus Drive.

Nine monks, dressed in orange or brown flowing robes, laid the first brick in the ground during the colorful, multipart ceremony.

Future bricks could be laid at the site as soon as March, said John Tai, a representative of the Columbus Buddhism Center, the nonprofit group attempting to bring the temple to Pataskala.

Tai said Thursday he is working to raise $1 million to $1.2 million in Thailand to build a residence hall/rectory for monks.

Once the residence hall is complete, Tai said he would like to start raising funds to work on the rest of the temple.

"I need to have a building here to get the fundraising going (in the United States)," said Tai, a Columbus restaurateur.

Widesbrommakun, who is one of a handful of monks trying to get the temple built, said the project is going to take time because of fundraising needs.

"We want to build step by step," he said.

Widesbrommakun was joined Thursday by Phra Brommolee, the abbot of Wat Phichayayatikaram in Bangkok, Thailand. Brommolee also serves as the president of his country's National Committee for Buddhism Promotion, and Brommolee presented Tai with a donation of $150,000.

Aside from raising $1 million to $1.2 million for the residence hall/rectory, Tai said supporters need to raise another $10 million to $12 million to build the temple. He said he hopes to convince corporate sponsors to assist in the effort.
The proposal

Tai this week provided The Advocate with a conceptual site plan for the temple.

The plan breaks the site into three major areas, defined as:

» The Sankawasa -- Located on the south side of the site. Consists of a rectory and administrative building, in addition to dwelling units for monks and pilgrims and a residential cluster surrounded by serene landscape settings. Tai said he envisions at least five monks being stationed at the temple.

» The Buddhawasa -- Located in the middle of the site. Consists of a chapel aligning with the main gate and a Jedi that houses a library and museum. Sala buildings, used for meditation teaching and practicing, would be in the rear.

» The Krawasa -- Located on the north corner of the site, adjoining the parking lot, this would consist of a plaza and courtyards and a community meeting hall.

Developer H. Burkeley Showe and his family donated more than 7 acres for the Tai and the nonprofit Columbus Buddhism Center to build the structure.

Showe attended Thursday's ceremony, and he also attended another ceremony on Blacks Road in June 2010. That ceremony consisted of monks blessing the site.

After the 2010 ceremony, there was no news surrounding the project for some time, but Tai said he was busy attempting to raise construction funds in Thailand.
What's next?

In late 2010, Tai asked the city for a lot split of 7.851 acres off the 83-acre tract of land Showe owns, and the city approved the split because it met all zoning requirements, Planning Director Dianne Harris said.

Tai still needs to complete some work before construction can start.

In addition to continuing to raise funds, Tai said he plans to fly to Thailand in September to secure an official construction blueprint for the site.

Tai must submit a formal development plan to the city before breaking ground, and both the city and county planning department need to sign off on the plan, said Harris, adding she has received no such paperwork.

The site currently is farmed, but it is zoned for residential uses.

A rezoning -- at least for the temple -- is not needed because religious institutions receive federal protections. Living quarters, such as a rectory, also would fit under the city's residential uses zoning designation.

Tai has discussed building a floating Oriental market, restaurant, spa and hotel on the ground in the future, and he said this week he would like people to be able to come to the site to learn Thai dance and martial arts, among other Thai- and Buddhist-based offerings.

"We want to do this and then bigger things, like an international farmers market with vendors from other countries," he said.

Pataskala Mayor Steve Butcher attended Thursday's ceremony, and he said the property will need to be rezoned to permit those non-religious uses because they do not carry the same federal protections.

Since Tai announced plans for the temple in 2009, Butcher has invested time in learning about Buddhism and Thai culture.

On Thursday, he spoke at the ceremony.

"We certainly have a lot of work to do in the next couple years, but you have a beautiful location for your temple," Butcher said.

Speaking before the ceremony, Butcher said the business part of the site, with the floating market and spa and hotel, would be a boon to the city -- if it ever comes to fruition.

"It's no secret we want to grow our commercial and business base to get out of taxing (residential) homes," he said.

Tai, for his part, said he envisions the development attracting people from all over the world to Pataskala.

"We want to (increase) tourism," he said.
TOP