Princeton, New Jersey (USA) -- This week, men in red and orange robes, the Tibetan Monks of the 2011 Drepung Gomang Monastery Sacred Arts Tour, will construct an interfaith sacred sand mandala, a three-dimensional drawing made of sand - in Frist Campus Center from Sept. 19 through Sept. 22. 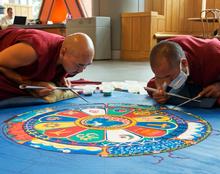 In addition to the mandala, the monks are hosting discussions, slide shows, pujas - chants and prayers - and lectures during their tour, which is sponsored by the Fields Center and Community House. The tour will also be selling merchandise such as scarves, beads and clothing, most of which were handmade by the monks.

According to a pamphlet produced by the Drepung Gomang Monastic University, the Sacred Arts tour aims to “make a contribution to world healing and peace” by sharing Tibetan Buddhist teachings, offering sympathy and prayers for the world’s tragedies and raising awareness of the “endangered Tibetan civilization and human rights abuses by the Communist Chinese.”

Members of the tour said they hope to raise financial support for the nearly 2,000 refugee monks “who call the South Indian monastery in exile their home,” according to its website.

The Drepung Gomang Monastic University is located in Karnataka, India, and was established after the monks were exiled from Tibet in the Chinese invasion of the 1950s.

The mandala, which represents peace and harmony between all religions, includes symbols familiar to religions such as Hinduism, Christianity, Judaism and Islam, as well as depictions of the four seasons and the natural world. A flyer distributed at Frist explained that the art is called “dul-tson-kyil-khor,” or “mandala of colored powder.” Over several days, the monks will carefully place bits of colored sand into a design on a flat platform to create the mandala.

On Thursday, in keeping with the tradition of mandalas, the sand will be swept up and dumped into Lake Carnegie to symbolize the transience of all things. According to the flyer, this ritual is done so that the waters can “carry healing energies throughout the world,” and is typically performed in rivers or streams.

Students said they appreciated the symbolism of the mandala.

“I love how they’re combining all the different world religions into one piece of art using a technique that holds so much importance and tradition for them,” Alex Rodgers ’14 said. “The peace message is coming across beautifully.”

Meanwhile, others such as Jenny Zhang ’13 had mixed feelings. “I think it’s really cool what they are doing,” she said. “But I wonder how effective it is going to be, how many people are going to receive the message and if it is going to be gone on Thursday, regardless of the symbolic nature of sweeping it up.”

Many of the monks learn the art both at home and at a nearby monastery, monk Dawa Tashi said. When they have less time than usual to create a mandala, such as during their stay at the University, they work for longer periods of time and rotate positions among several artists.

The monks are currently staying in Toms River, N.J., located an hour away from the University.