Faith on the Hill: Buddhism

Medford, Massachusetts (USA) -- Mindful, conscientious, contemplative - not exactly words commonly used to describe college students, whose primary responsibilities are often limited to showing up to class and getting decent grades. But a small group of Tufts students - though not quite living monastically - apply these principles of Buddhism, with varying degrees of devotion, to their daily lives. 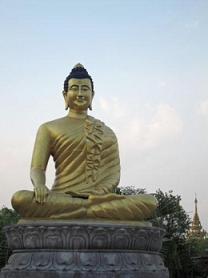 Though Buddhism is among the world's largest religions, it's practiced relatively rarely in the United States, with less than 1 percent of those surveyed self-identifying as Buddhist in a 2007 Pew Research Center study, though more may adhere to the religion's basic tenets without categorizing themselves as members.

Nicholas Matiasz (E '10), now a graduate student in the School of Engineering, is among those on campus who practice Buddhism.

"People ask me if I'm Buddhist and my answer has increasingly become yes," he said. "Out of respect for the tradition, I can't deny that it's a huge part of my make-up at this point."

Though Matiasz was raised as a Roman Catholic, he wasn't entirely fulfilled by what the faith had to offer.

"I wasn't especially disgusted with that or anything, and I wasn't looking to find another religion per se, but as I read about meditation I realized that my spiritual practice wasn't doing as much for me as I wanted it to," he said.

"As I started reading more and more about meditation, I developed an appreciation for Buddhism as a whole," he said.

The influence of Buddhist teachings has markedly impacted Matiasz's daily life, he said.

"Honestly, Buddhism has profoundly changed my worldview on a moment-to-moment kind of level," he said. "I stopped believing that the way to find happiness was just always searching for the next pleasant stimulus. Now I try to cultivate a mind that is content without the next big concert or promotion or something."

Along with his fellow participants, Matiasz congregates with the Tufts Buddhist Sangha - roughly translated from Sanskrit as "assembly" or "community" - each Wednesday for meditation in Goddard Chapel, as well as at weekly Sunday-night meetings.

The general format of the Sunday gatherings is fairly relaxed, according to Matiasz. The group opens with a meditation lasting from two to 30 minutes, followed by a discussion, a shared reading or both, usually on the topic of contemplative practice, Matiasz said. Though, he added, the composition of the participants each week dictates the subject matter. The Sangha's faculty advisor, Dr. David Arond, an assistant professor of public health and family medicine at the School of Medicine, leads the discussions, which tend not to delve too deeply into the religion's more complicated ideology, according to Matiasz.

"[Buddhist] philosophy can get complex and intricate and requires a common vocabulary for all of the members, so we don't really cover it [in the meetings]," Matiasz said, though he added that some participants do attend meetings in order to learn more about Buddhism's philosophical aspects.

Matiasz feels that Buddhism is often neglected or misunderstood by Americans because of the religion's relative scarcity in the Western Hemisphere.

"What bothers me the most is that in a lot of conversations about religion in our culture, ‘religious' refers to the three Abrahamic traditions and the common aspects of those three," he said, referring to Christianity, Islam and Judaism. "So much is lost about very contemplative traditions like Buddhism and Jainism when you kind of sweep those under the rug of that same category."

Another common misconception, according to Matiasz, regards the Buddhist concept of eliminating desire.

"Something I've come across multiple times, that I see so often, is people who think that Buddhism is about removing desire," he said. "That's a really bad caricature, because so many people think that even means you have no desire to help people and that you turn a blind eye to injustice."

Instead, Matiasz said, much of Buddhism entails determining the causes and conditions of both happiness and consumption, rather than ceasing to seek the former.

Though junior Elizabeth Mastors' interest in religion and philosophy was sparked in high school, where she studied Buddhism academically, she was introduced to Buddhist practice upon arriving at Tufts.

"I went to a Quaker high school, and they have a similar tradition [to Buddhism] of sitting in silence," she said. "For some people, it's meditation. For others, it's more of a community gathering. I was looking for a similar community when I got to Tufts, for a space to collect and reflect."

Mastors is an active member of the Sangha, but she doesn't necessarily consider herself a Buddhist, just someone who uses the religion's principles as a source of guidance.

"If someone asked me my religion, I don't know that I'd say I'm a Buddhist," she said. "It's just a way for me to maintain perspective."

Central to her practice of Buddhism is the notion of mindfulness, according to Mastors.

"[Mindfulness] is sort of a very broad term, but for me it's about being aware of the moment. In guided meditation, you'll hear ‘I breathe in and I'm aware that I'm breathing in' … and a lot of gifts sort of manifest as a consequence of that awareness," she said.

"It's about feeling compassion for people in place of bitterness or anger," Mastors added. "It's not bad to feel angry or sad, it's just important to be aware of those feelings and what's causing them."

Mindfulness doesn't necessarily gel with the standard college routine of equal parts freneticism and slothfulness, but Matiasz and Mastors both stressed that Buddhist practice can be squeezed into an otherwise hectic schedule.

"There's not much that's contemplative about a college lifestyle, but obviously I haven't been in solitary retreat for the last five years," Matiasz said. "You have to weigh your priorities, so I made the necessary sacrifices to try to meditate regularly and live in a college environment."

Mastors echoed Matiasz's sentiment. "The college lifestyle for so many people is just chaotic and stressful and you really don't take a step back," Mastors said. "I would say that my college experience is very normal and typical, but the benefit [of Buddhism] for me has been that I take the time to be grateful for the things that I'm doing. I try not to get carried up in things like finals and grades... For so many people college is a time for figuring out who you are and being away from home for the first time, but I haven't succumbed to the new stress and displacement and confusion that college can induce."