Hudson Valley, USA -- There will be a celebration of Vesak, Buddhism’s holiest day, on Saturday 5 from 9 a.m. to 5 p.m. at Tsechen Kunchab Ling, Temple of All-Encompassing Great Compassion, 12 Edmunds Lane. The event is free. 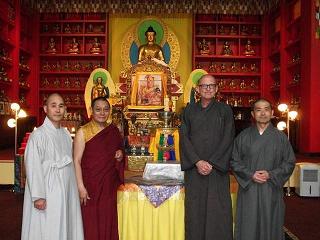 Vesak commemorates the Buddha’s birth, enlightenment and passing more than 2,500 years ago in India. Since 1999, it has been recognized as a United Nations Day. Buddhist temples have come together for annual Vesak celebrations in major metropolitan areas in the United States such as New York City, Washington and Los Angeles. This will be the first time that Buddhists in the Hudson Valley have hosted a joint celebration to meditate together on their holiest day.

People are welcome to drop in throughout the day.

“In addition to the spiritual dimension, the program offers a unique and free opportunity to sample the art, music, dance, food and living culture of four different Asian countries, all in a single day right here in the Hudson Valley,” said the Rev. Chodrung-ma Kunga Chodron, a Buddhist nun at Tsechen Kunchab Ling who helped organize the event.

The program will begin with a colorful procession of Buddhists from many countries doing walking meditation around the new temple building. Inside, monks will perform chants in honor of the Buddha in their native languages.

Lunch will be a buffet of vegetarian food from all over Asia, with each participating temple sharing its ethnic cuisine. The afternoon program will include meditation and a talk by Buddhist scholar Venerable Bhikku Bodhi . It will also include a sacred Korean monastic dance expressing the search for truth, and videos of Vesak celebrations in other parts of the world.

“People of all faith traditions, and those of no particular tradition, are welcome to join the celebration,” said the Venerable Gikwang Sunim, abbot of the Korean Temple, Won Kak Sa. “Everyone agrees about the need for more happiness and compassion in the world.”