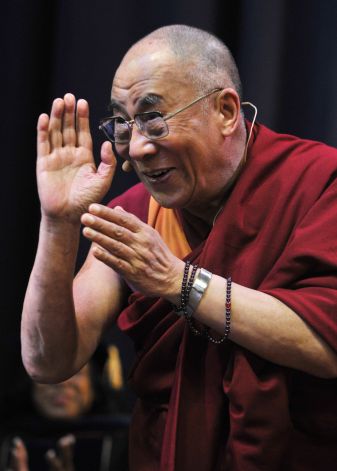 On his second day at Western Connecticut State University, he would offer a talk titled "Advice for Daily Life."

The 77-year-old Buddhist leader, the 14th Dalai Lama, shared playful anecdotes along with firm convictions during his talk about forgiveness, cultivating inner strength and the role of education in developing an approach to life.

"Your firm conviction, genuine concern for others, is the ultimate source of your own peace of mind," he said.

He warned that a self-centered attitude leads people to a sense of insecurity and fear.

"The method to conquer fear and insecurity means you must develop concern for others," he said. "When you develop inner peace, it means no matter what sort of environment you are in, your mind is calm."

The Dalai Lama generated applause during his one-hour speech from the 3,500 people on hand when he said education has a very important role, but it should include teaching about inner values.
The crowd -- from an infant in arms to seniors walking with canes and wheelchairs -- filled bleachers and folding chairs, intent on hearing the Dalai Lama.

When actor Richard Gere introduced His Holiness for the second day, he said that although people have the will to get through tough times, they have soft hearts and can learn from the Dalai Lama.

"He doesn't look Tibetan now, he looks universal," Gere said. "We have to take credit that we have the good karma to be here. Let's welcome one of the great beings to walk on this planet."

An important value in the Dalai Lama's talk was forgiveness.

Sometimes forgiveness is viewed as a sign of weakness, but that is wrong, he said.

"Forgiveness is a sign of strength. Anger is a sign of weakness.''
The Dalai Lama, who often discusses how compassionate living transcends individual religious beliefs, described how Mother Teresa and Dr. Martin Luther King Jr. sincerely followed their beliefs, but that not everyone does.

There are people who profess to be religious, who say their prayers, but don't care about others, he said, but they are not following their religion sincerely or seriously.

"Once we believe, we should be serious and sincere," he said.

During the introductions Friday, WestConn President James Schmotter presented the Dalai Lama with an honorary doctor of humanities degree, saying it represented and acknowledged "deep, deep appreciation for the work of His Holiness to promote peace and compassion all around the world."

At the end of the Dalai Lama's speech, Schmotter thanked him for "giving us lessons that will be with us the rest of our lives."

"The whole campus is excited about the Dalai Lama's visit. We all embrace the message he brings to Danbury," said WestConn Assistant Social Sciences Professor Carina Bandhauer, who was in the audience Friday.

She said she has followed the Tibetan political situation for a long time and heard the Tibetan prime minister speak at WestConn last year.

"This unites the city, which has not always been so compassionate," Bandhauer said. "I hope everyone embraces the message of compassion."

Mary Bethel Coelho, of Litchfield, finds the Dalai Lama so powerful that she attended both days, bringing a son Thursday and her brother Friday. She previously saw the Dalai Lama at Emery University with her other son.

"His teachings are enlightening enough to read, but to see the tone and happiness he exudes as he is talking to a crowd is really life-affirming," Coelho said Friday.

With the world so filled with violence and war, she said, he serves as an ideal for a different way of life.

"I think the greatest change will come with what we teach our children and what they teach their children,'' she said.

She said her husband, who has been ill, has been soothed by the Dalai Lama's philosophy about the need to expand your energy to solve a problem if there is a solution, but not to waste time worrying if the solution is not available.

Her brother, Bryan Spiotti, a police officer from Oakville, said he and Coelho became interested in Buddhism at the same time, and he's found that using compassion helps him in his work.

"Learning to live in loving kindness does change your perspective," he said.

The Dalai Lama urged the members of the audience to educate themselves, to investigate concerns and bring conviction to their beliefs, so that approach would become part of their nature.

"Day by day, month by month, year by year, principles become part of daily life," he said in answer to one of the questions after his talk. "That is the way to transform life."