Taunton, MA (USA) -- The temple under construction on South Street East in Raynham is to be called the Wat Nawamintararachutis, or NMR Center for short. Those behind the project say the 109,000-square-foot complex will be the largest Thai Buddhist meditation center outside of Thailand. 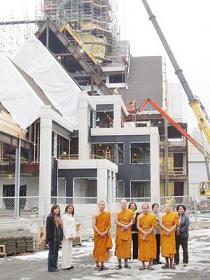 The structure is dedicated to Thailand’s reigning King Rama IX, Bhumibol Adulyadej, who was born in a Boston-area hospital in 1927 while his father studied at Harvard University. The Thai government agreed to finance the project.

The functional center of the building will be three stories high. Visitors will enter the first floor to find a museum for the king, similar to a presidential library, with a café as well. There will be a meditation room on the second floor. The third floor will be a temple with a giant bronze Buddha weighing 15 tons, standing 20 to 25 feet high, that will be shipped from Thailand in pieces.

The temple will be topped with a ornate golden Chedi or spire, bringing the building’s total height to 185 feet. The project features aspects of New England architecture, such as gables, blended into the traditional Thai temple architecture.

The frame of the Thai Buddhist wat, or temple, has been visible from the road for the last year, but it has taken form in recent months as work on the exterior progresses. Construction workers continue to work throughout the winter.

Members of the temple said Hurricane Sandy caused a delay in the work, setting back the estimated completion date by about a month. The Thai Buddhist community first took action on the idea of building a Thai Buddhist temple in Raynham in 2006, when a Thai Buddhist abbot bought the 50-acre Raynham property, and a group of monks moved to the neighborhood.

A groundbreaking was held in September 2011. Members of the Thai community look forward to the project’s completion, so that hundreds of Thai Buddhists from all over New England can visit for special ceremonies and gatherings that take place each year. Lamiad Wechapak, NMR Center director and monastery affairs manager, said that after the exterior is completed, the interior will be finished and the building’s spire will be added.

As part of the interior work, “delicate” artwork to be displayed inside will be imported from Thailand and installed by Thai workers, members of the temple said.

Go to www.watnawaminusa.org to find more details about the NMR Meditation Center. Questions or comments can be sent directly to the temple by writing to watnawamin@yahoo.com. The group also maintains a page on Facebook.