FARMINGTON, Maine (USA) -- In an effort to leave stress behind and seek introspection, a group of western Mainers unfurled meditation mats and blankets, laid down on the floor with their arms at their sides and their eyes closed to participate in guided mediation. 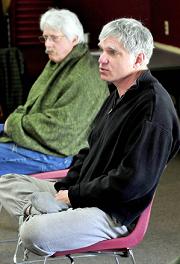 << Joe Rankin, right, and Tim Davis spoke to participants during the Western Maine Buddhism seminar at the University of Maine in Farmington on Sunday. Rankin is a former Morning Sentinel reporter and Kennebec Journal editor. Staff photo by David Leaming

The 30 people in attendance were gathering for the Western Maine Buddhism seminar, which met Sunday afternoon at the University of Maine at Farmington.

"We're just really starting to build the community," he said.

The organizers decided to host the event as a way of gathering people interested in Buddhism along with members of three local Buddhism groups, or "sanghas."

Buddhism, considered one of the major world religions, was founded in India around 500 B.C. Most followers are found in Asian countries such as India, China and Japan.

Buddhists generally believe that correct thinking and self-denial will enable the soul to reach nirvana, a state of release into ultimate enlightenment and peace. Specific philosophies, however, vary by sect.

A co-organizer from each of the three groups spoke to the crowd about their respective Buddhist traditions and their personal experience practicing.

Along with the mini-seminar about the different traditions, the group participated in a question-and-answer session, along with meditation and yoga exercises.

Those in attendance also brought food donations for Care & Share Food Closet. The invitation for the gathering stated that in Buddhist circles, giving, or "dana," is an important part of the tradition and asked those planning to attend to donate if they were able to do so.

Chesterville resident Marjorie Cormier said she thought the event was informative. She said she has practiced Buddhism on and off and enjoyed the seminar as a way to help renew her practicing.

"It was a very nonthreatening way to learn," she said.