Ithaca, N.Y. (USA) -- The Namgyal Monastery will host an open house for the public at their new location, Du Khor Choe Ling, on Friday, November 7. This event will involve a free evening of mediation and a social tea. 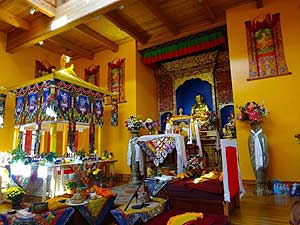 The event is intended to provide the public with the opportunity to increase their understanding about Buddhism and carry out the Tibetan monks mission of spreading Buddhist ideals to the West. Hans Schmidt, a student at the monastery and practicing Buddhist, said he will be volunteering at the open house.

“It’s where the monastery opens its doors to the community and invites people in to see how we do what we do and to show them the sand mandala that was created this summer,” Schmidt said. “We’ll have a social tea, part of our sangha, growing activities, the community here.”

Many people in the community do not know about the newly built Buddhist monastery, Ngawang Dhondup, Namgyal Monastery administrator said.

Buddhism is a religion that follows Buddha’s teachings through practicing compassion to all humans and animals, Dhondup said.

“Buddhism says that you should be a compassionate person, if you are not able to help someone, most important thing is don’t harm them, this is the message,” Dhondup said.

Buddhism is different from other religions because it does notpromote religious conversion, he said.

“We don’t tell our students whatever our teachers teach you, you have to accept that,” Dhondup said. “Every student should verify what is good and what is not good to them and only then should they accept [that].”

Meditation, a popular Buddhist ideal, is a practice that aims to help individuals calm their minds. Schmidt, said he turned to meditation to calm his mind.

“I was tired of having a monkey mind. My mind was all over the place and there was really nothing I could do to bring it under control. Meditation was the way that I learned how to do that,” Schmidt said.

“Initially I was looking for something that would allow me to – help me relax but then as I learned more, I became more interested, I realized it was a lot deeper,” Rubin said. “Buddhism, to me is, in a lot of ways, it’s training your mind and mediation is an important integral part of that.”

“We are basically pretty much involved in anything monastery,” Delogtsang said. “We’re up there helping anytime they need help.”

During the construction of Du Khor Choe Ling, Delogtsang said members of the association volunteered to paint the building and move the furniture around, highlighting the importance of compassion within Buddhism.

The open house will be the second event to take place at Du Khor Choe Ling since its completion on Aug. 21, 2014.