To be Buddhist monks at Harvard

As Divinity School students adapt to University life, they also face assumptions made about them

Cambridge, MA (USA) -- Bhante Kusala says being a Buddhist monk at Harvard has its quirks. 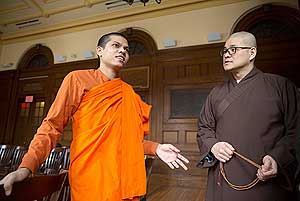 Leaning forward and adjusting his cinnamon-colored robe in the crowded Rock Café at Harvard Divinity School (HDS), the shaven-headed Kusala confided, “In this culture, people like to give a hug in friendship, but monks don’t do that. We don’t even shake hands.” When asked what he does when hugged by a Harvard student, the Sri Lankan monk and first-year HDS student laughed and said, “We’re supposed to hug back, or I believe it’s very rude.”

Thanks to the Robert H.N. Ho Family Foundation Scholars fellowship, Kusala is one of a growing number of monks from Asia invited to study at HDS. The one-year scholarships cover all tuition and living expenses. Now in its second year, the Ho fellowship program increased the number of scholarships from three to five. The fellowship is part of the Buddhist Ministry Initiative program now in its fourth year.

The Ho Foundation scholars program welcomes Buddhist students who are from Asian countries.

Today six Buddhist monks - including one nun - studying at HDS from countries such as Sri Lanka, Nepal, and Bangladesh are adapting to a new way of life in Cambridge, while keeping an eye on what they plan to do with their Harvard education upon returning home.

Nestled on a sofa in the lounge of Rockefeller Hall, Upali Sraman, a second-year student and Bangladeshi Buddhist monk, said that his robe has a funny effect on people. “I have to be more conscious of everything I do, because I realize that I’m being judged,” he explained.

Upali — who abstains from drinking alcohol, eating meat, and engaging in sexual activity — said people think monks are supposed to be perfect. “But underneath our robes, monks are very human,” he said, sipping a cup of green tea as the mercury outside dipped to 18 degrees on a snowy afternoon.

Monks have their temptations and moments of weakness like anyone else, Upali said, and it is unrealistic to expect them to be more. “Worse,” he said, “you might be putting that monk in danger of having to lie or be dishonest so that they can live up to your expectations.”

Chang Gan Shi, a Buddhist nun from Taiwan, agreed, adding that as a first-year HDS student she too has her challenges. “Like being the only Buddhist nun around here,” she said with a laugh. “I wish I could have a companion, someone to relate to. Sometimes it can get lonely.”

Wearing a long gray robe and sporting a black beanie over her clean-shaven head, the 44-year-old Shi spoke in a cafeteria at Harvard Law School (HLS) while enjoying a large slice of cheese pizza, fries, and a bottle of Coke, a problematic habit she picked up from living part of her life in New York.

Shi (who is not a Robert Ho Scholar) said another challenge is figuring out the proper social distance to keep with her Harvard peers. Can she go with them to a movie, or to a party? Should she tell them up front that she would rather not be hugged?

Seated almost shoulder-to-shoulder with students in Harkness Café, which was swarmed by the boisterous noontime crowd, she said, “You can come off pretty unfriendly if you tell everyone not to hug you. But yet, I’m a Buddhist nun, and I need to keep some social distance. But it’s not always easy.”

Sporting a crimson robe, blue sneakers, and a hearty laugh, 25-year-old Tajay Bongsa, a first-year HDS student, might not look or sound like the stereotypical monk, but, “Every monk has their own personality,” he declared. Bongsa said he sometimes drinks alcohol, eats meat, and might even — on occasion — laugh at a dirty joke. “Why not?” he asked with a chuckle, but he added that he draws the line at laughing at something that might be hurtful to another person.

Bongsa said many Americans assume all Buddhist monks are calm, quiet, and always peaceful. “But come on,” he said. “Before most people even meet a monk, they have an idea of how we should act, behave, and be. But we might be different than what they expect.”

As a member of an indigenous minority community fighting for its land rights in Bangladesh, Bongsa said he comes to Harvard with a double mission. He wants to study religion at HDS while also taking classes at the Harvard Kennedy School (HKS) to help synergize a political, economic, and spiritual solution for his people’s land rights campaign in Bangladesh. “I come from a poor family,” Bongsa explained, “so to have this opportunity to come to Harvard — through the Ho Scholars program — and learn something that might better help the lives of my people is both gratifying and humbling.”

Bongsa is not alone in having big plans for his education. Shi would like to work with Harvard’s Chinese scholars to translate ancient Buddhist scriptures into English. “There is a neglected treasure of human knowledge in these documents that could be shared with the world,” she said. “And Harvard has the expertise and clout to get something like this started.”

Ishwor Shrestha, a second-year HDS student and Tibetan Buddhist minister from Kathmandu, Nepal, is also on a mission. While forging his way through the snowy campus, the blue-jean-clad Shrestha said that at HDS he is learning how to spiritually counsel the dying. “There is a great need for this type of ministry in my country,” he said. The 38-year-old, whose dark hair is flecked with gray, explained that people die in Nepal without proper medical care or someone to help them face their end. “There is no program for this in my country, but I want to change that.”

Shrestha wants to coordinate with non-governmental organizations in his country to develop Nepalese spiritual counseling and end-of-life care programs. “Everyone deserves to die with dignity and respect,” he said. Shrestha said a course at HDS on interfaith caregiving, taught by Chris Berlin, is now preparing him for this type of chaplaincy.

Enjoying a veggie burger at Cambridge Common, Berlin, an instructor in ministry and pastoral counseling — and himself a practicing Buddhist — said that HDS benefits just as much from having the monks as the monks do from studying at Harvard. Berlin said that in his “Buddhist Polity” class, for example, when the monks talk about their spiritual community, students listen. “Because it’s not coming out of a book, it’s not an opinion. It’s coming right out of their own lives,” he said. “It’s hard to beat that for a source.”

Asked how he feels about the impact his teaching has on many of the monks at HDS, Berlin said, “You couldn’t ask for more of a reason for why I teach. It almost brings tears to my eyes. It’s very humbling.”

Not everything is smooth sailing for these Buddhist practitioners, of course. Last year at a student event, Shrestha said a Christian undergraduate told him that Buddhists go to hell after they die. Shrestha said he was shocked, because in his faith such a view is antithetical. “The Buddha said never degrade any other spiritual teacher; if you degrade them, then you’re not my disciple,” Shrestha explained.

Nevertheless, Shrestha said that the positives of attending Harvard far outweigh the negatives. “What I have learned at Harvard will improve the lives of many in my country, and what can be more important than that?”

Seated amid the imposing buildings at HLS, Shrestha was asked if he worries that his studies at Harvard might cause him to doubt or even lose his faith.

“If you’re hungry and you eat,” Shrestha said, “you don’t have faith that the food will satisfy your hunger; you know it will. My faith is safe at Harvard.”

----------------
Anthony Chiorazzi, who has an M.Phil. in social anthropology from Oxford University, is studying for a master of theological studies degree (M.T.S.) at Harvard Divinity School. He has researched and written about such diverse religious cultures as the Hare Krishnas, Zoroastrians, Shakers, and the Old Order Amish.