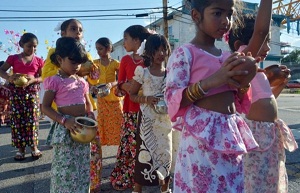 << Children march in a parade to help the Staten Island Buddhist Vihara commemorate its 16th anniversary as the sole Theravada Buddhist temple in Staten Island, Sunday, August 2, 2015. The parade and activities focused on the youth in the temple. (Staten Island Advance/Bill Lyons)

"Today is special because it was organized by the young kids who were born here," said Willowbrook resident Mudith Weedagama, who arrived in Staten Island as a student and has watched the explosive growth of the borough's Sri Lankan community between 1990 and today.

"I came here because of the children," said the temple's senior monk, Bhante Kondanna, who lives on the premises, stressing the importance of connecting them with the tenets of Buddhism. Before the temple opened, he traveled three hours by public transportation from Queens to teach every two weeks in private homes in Staten Island.

Sunday's event began with a long "cultural parade" down John Street, with participating children and young adults in colorful traditional dress, some of them performing dance as proud parents looked on, snapping photographs and shooting video.

The temple - named the Staten Island Buddhist Vihara - practices the Theravada tradition and actively builds bridges to religious leaders and communities of other faiths.

It was a place of solace in the aftermath of the 9/11 terror attacks, and the temple held a vigil in St. George in honor of the victims.

In the aftermath of the 2004 tsunami in Sri Lanka, the temple was a venue for collection of supplies to send to devastated areas of the island nation. The temple also helped build 21 houses in Wadduwa on the country's southwest coast.