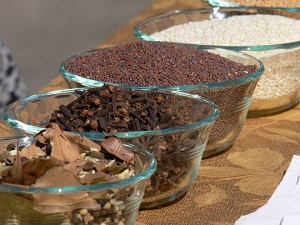 << Herbal medicines like these are offered during a Buddha of Compassion Fire Ceremony. (Photo: Special to the Statesman Journal)

The public is invited to the event, which was planned in the wake of the tragedy at Umpqua Community College that left nine people shot to death and nine more injured.

"When we have a lot of suffering, the 'Buddha Compassion' fire can help people heal mentally and physically," said Rinpoche, a Bhutanese Buddhist monk and the founder, spiritual director and teacher at the Drukpa Mila Center in Salem.

He also has a center in Colorado and just recently returned from spending time in his native country, Bhutan.

"Once I heard the shooting happened in Oregon, I was feeling very bad and upset," Rinpoche said. "I wanted to help heal, and also pray it never happens again."

Rinpoche has performed 75 sacred fire ceremonies all over the United States, including one this past summer during the 2015 World Beat Festival at Riverfront Park.

This ceremony will take place under the Pavilion and is expected to last about three hours. Rinpoche will chant and recite prayers while bowls of herbal medicines are offered to the fire.

Those who attend can participate by pouring these offerings into the fire, or by bringing written personal prayers for loved ones that can be added to the fire at the end of the ceremony.