Buddhists from around the world meet to call for peace

Wappingers Falls, New York (USA) -- Hundreds of Buddhist teachers, monastics, and practitioners from the U.S., Canada, Europe, South America and Asia have come to the village this week to call for world peace. 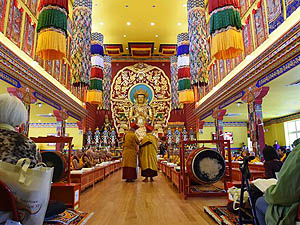 It is part of a five-day festival, held from July 6-10 at Kagyu Thubten Choling Monastery in the village.

“(We) believe that, through prayer, we can have a positive effect on events, and that the more people who are praying together, the stronger the effect,” said Linda Jordan, known as Lama Chodron.

The festival, called the 2016 North American Kagyu Monlam, has roots in Tibet, but has since spread to 16 countries, as Buddhism has become more popular and the way of life has traveled across the globe, according to Lama Chodron.

This week marks the first time the festival was held at the monastery in Wappingers Falls, located on 245 Sheafe Road.

With the festival comes the dedication of a new two-story, 35,000 square-foot Maitreya Center. The center includes Tibetan-style Vajrayana and Chinese-style Mahayana shrine halls, as well as a gathering hall. Work for the center began nearly nine years ago. But, the project was put on hold when funding fell short during the Great Recession. Construction started again in 2011 and was completed this year.

“When we first started, the building looked so beyond our means on every level,” said Lama Jamdron. “And the fact that it has come together and culminated in this way with everyone coming here from around this world is special.”

Walking into the hall, ornate tapestries hang from the walls. On the floor are a plethora of baroque rugs and plush pillows. At the center, stands a shrine, complete with a 34-foot gold statue of Maitreya Buddha, the current Buddha. Local Buddhists will experience what it is like to step into a monastery similar to those built in Tibet, officials said.

On Wednesday, nearly 500 visitors prayed and listened to Buddhist teachings passed down from generations taught by Khenpo Kathar, who also serves abbot of Kagyu Thubten’s sister monastery in Woodstock. As part of Khenpo Kathar's teaching, he called for Buddhists to come to "realization" through devotion and prayer.

Lama Chodron said she first became interested in Buddhism because of its mission to “accept all people.”

“Buddhism deals with how to be happy in life and to have less suffering,” she said. “It’s about how asking how we can help other people and the golden rule:

'Do unto others as you would have them do unto you.' We really believe in the golden rule very strongly. So, we practice compassion.”

Some of those who regularly practice Buddhism locally, have come from Tibet, she said.

“There are a lot of religions represented in this country," Lama Chodron said. "Our lama (Lama Norlha Rinpoche) often says he loves the United States because Tibet was taken over by communists 1950s. They didn’t have a lot of religious freedom then and they don’t have much there now. Here, we have a lot of different religions and people can pick the one that makes the most sense and feels the best for them. It seems that there are a lot of people who, more and more, feel like Buddhism is a spiritual path that works for them.”

Chodron said the center is open to the public. For more information, visit http://www.kagyu.com/.
TOP