Lawrence, NH (USA) -- Human rights groups are leaving their marks on the world, and an individual or a community motivated to help others will find that world peace will come naturally, a Tibetan monk said during a lecture Tuesday night at the Lawrence Arts Center, 940 N.H. 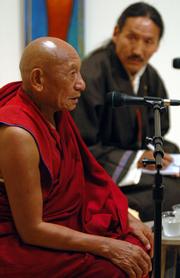 Speaking through an interpreter to an audience of more than 100 people, Palden Gyatso described himself as “just a monk” armed with the weapon of truth during a lecture he called “Freedom, Dignity and Justice in the Land of Snows.”

Gyatso, who was born in 1933, became a Buddhist monk at the age of 10. He was arrested in 1959 for protesting Chinese occupation of Tibet. He spent the next 33 years in prisons and labor camps where he was often tortured. When he was released, he fled to India in 1992. He said he knew that if he survived that ordeal, he would speak up for his rights.
Tibetan monk Palden Gyatso, left, and his interpreter, Rigdzin Tingkhye, speak during Gyatso’s final lecture at the Lawrence Arts Center on Tuesday.

Gyatso commended the work of human rights groups today and he urged people as individuals and communities to cherish the needs of others over their own. In doing so, their own needs will be taken care of naturally, he said.

“Once we accept that we have anger then we can do something about it,” he said. “We should not let anger dominate us. If we do, then we become helpless.”

Gyatso has been in Lawrence for the past several days conducting lectures and participating in discussions. His appearance was sponsored by the Hall Center for the Humanities at Kansas University and the Lawrence Arts Center’s Committee on Imagination & Place.

In 1998, Gyatso was awarded the John Humphrey Freedom Award by the Canadian group Rights & Democracy. The award is named for John Peters Humphrey, a Canadian human rights law professor who prepared the first draft of the Universal Declaration of Human Rights.