Ithaca, New York (USA) -- Geshe Tsultim Gyeltsen, a renowned teacher and founder of various Buddhist teaching centers in the United States, explained the essence of Tibetan Buddhism yesterday afternoon. The lecture, entitled “Four Decades of Dharma: Reflections on Teaching Tibetan Buddhism in the West,” was sponsored by the anthropology and Asian studies departments. 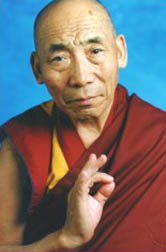 Gyeltsen emphasized compassion, love and kindness as the central aspects that Tibetan Buddhism teaching embodies. He stressed that respect for others, and especially respect for one’s parents, is central to the beliefs of the religion.

In contrast to self-cherishment, he insisted that “cherishment of others is great — it is the cause of joy.”

This cherishment of others is defined as compassion, while love and kindness, two other vital aspects of Tibetan Buddhism, allow man to quell jealousy of others.

Gyeltsen related current problems facing the world to these three hallmarks of the religion. The first issue he discussed was world peace, which he said could become a reality through the sharing of ideas.

The talk also covered current damage to the environment, the importance of protection and worrying about the present rather than focusing on the future.

“Today has been already — tomorrow is more important. It really is,” Gyeltsen said.

The final issue that he addressed was human rights for all people. “Dignity of people is very important. Rich or poor, adult or child — it doesn’t matter,” he said.

Additionally, Gyeltsen emphasized that Tibetan Buddhism is only one of many ways to discover enlightenment.

In his lecture, Gyeltsen also discussed the next generation.

“Young people are very important. Young people need the right action for themselves and others,” he said. “The young generation wants to change the world.”

This faith in the next generation was contrasted by some of the youth he encountered when he first came to the United States in 1976. “When I came here, there were the ‘flower people’ [hippies]. They didn’t want to work. They were disrespectful of the government and their parents,” he said.

Despite these attitudes, Gyeltsen was also greeted by many who longed to truly learn about the religion. Therefore, in 1978 he established the Thubten Dhargye Ling center for the study of Buddhism in Los Angeles. Because of the center’s great success, Gyeltsen has since established schools in other states, including Colorado and Texas.

Gyeltsen’s lecture was warmly received by an audience of students, faculty and Ithacans.

“I take any opportunity to hear the Tibetan Buddhist perspectives on life. And it is interesting to hear about people who have left Tibet and are spreading their teachings. The message [of these teachings] is always about humanity, kindness and perspective,” said Elaine Surowick, a resident of Ithaca and student at the Namgyal Monastery.

The lecture also appealed to Cornell students. “I really connected with a lot of the things he [Gyeltsen] said, especially about love, kindness and compassion. And talking about the environment really resonated with me,” said Dan Jerke ’09, an intended natural resources major.