Rochester, NY (USA) -- For three days, 10 Tibetan monks worked tirelessly at Monroe Community College on an intricate piece of art made from millions of grains of colored sand placed on a flat board a few at time from a metal tube. 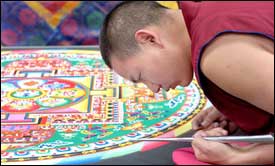 But the creation of a traditional mandala is not for the sake of art, but for the sake of contemplation. And when it was completed Wednesday, the sand painting that took 10 monks three days to create was ceremoniously scooped up and deposited in the Genesee River.

"To most students, that is just abhorrent that it's gone," said MCC professor Kathleen O'Shea. "But it teaches us so much about paying attention to the now. All we have is the now."

Buddhist monks from the Drepung Loseling Monastery in India have been touring the United States for the past 15 years, sharing their prayers for world peace while spotlighting the plight of the Tibetan people under Chinese occupation. Since 1959, Tibetans have not been allowed to practice Buddhism or teach their native language.

"Tibetans do not have much life," said Thupten Chosang, 28, a monk who was born in India after his parents fled Tibet. "They can't have a picture of the Dalai Lama because it's illegal."

The mandala is made of geometric shapes that come together in the form of a circle or square. Each design is prescribed in ceremony and has a different meaning, such as a prayer for world peace, for healing or for compassion.

Malcolm McCutcheon, the road manager for the tour, said it can take a monk 10 or more years of training to become proficient in creating a mandala.

"And in the end it just becomes a pile of different-colored sand," he said. "It represents the whole universe, our interdependence and our life. It is placed in the water to share the prayer of peace to the world."

The monks were brought to MCC as part of a new honors class focusing on the nature of experience, said O'Shea, the co-creator of the class. The class is designed to get students to focus on experiencing each moment through literature, music and art, she said.

Students designed a mandala as well. They and the community were invited to create it.

Sierra West, a student on the Campus Activity Board, said when she first sat down to work on the mandala, she was afraid of making a mistake.

"But they tell you can't mess up, you just create another layer of sand and keep going," she said. "Don't stress and it will come out beautiful."

The Tibetan monks do not seek possessions, power or status. They seek peace, education and harmony, said Chosang.

"I think if you really want to have world peace, all people should become monks," he said. "A monk's life is so happy life."