Buffalo, NY (USA) -- For some people, the pending visit from the Dalai Lama has sparked a fascination and perhaps even curiosity to learn more about the ancient religion of Buddhism. But for others in Western New York, Buddhism was a life commitment long before the visit from His Holiness. 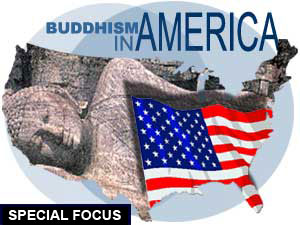 Beneath the sanctuary of Westminster Presbyterian in Buffalo is a room you wouldn't expect to find in a church.

It's a Buddhist Zendo sanctuary.

Most of the time this is a modest room that looks like any other church meeting space. But not on Tuesdays. That's when the Buffalo Zen Dharma Group lights the incense and bows before the altar of Buddha.

It's the first Tuesday of the month when we make our visit. That means it's newcomers night. So, we're invited to join the regular members of the Group and five people who are here to explore Buddhism. Ray Ball is longtime, practicing Zen Buddhist and facilitator for the Buffalo group. He loves newcomers.

That's not too surprising really. This isn't an easy commitment.

Ball coaches the newcomers on how to safely sit zazen. That's the sometimes painful seated meditation that helps Buddhists to focus their breathing and thinking, so they can strive for complete mindfulness, called sati.

The roughly three-hour evening consists of a three, 25 minute each rounds of perfectly still meditation. That's interspersed with a series of chanted prayer and prostrations. Ball admits return visits from newcomers are rare.

But newcomer Tristan Goldberg is ready to dispel that theory. The Jewish-born, gentle-voiced young man says he's yearning for peace - no matter the personal cost.

For college student Ryan Trubits, the path to Buddhist discovery began many months ago, before all the excitement over the Dalai Lama's visit.

But he thinks the visit is raising awareness of Buddhism for others. Trubits would like the religion flourish. But he says the very nature of the tradition makes recruitment difficult.

And it won't be easy to simply spot a Buddhist to ask how you can join.

Jeanette Ludwig is a professor at UB and a ten-year member of the Buffalo Zen group. She comes each week dressed in a flowing gray robe and sits zazen on her own zafu meditation cushion.

But outside the zendo sanctuary - the graying, jewelry-clad woman looks like most anyone on the street. And she said you won't recognize a Buddhist by stereotypes either.

"Buddhists are, by no means, all calm and sweet all the time," said Ludwig. "They're people with emotions too." As a Buddhist and a teacher of religions Ludwig worries about the misperceptions and what she called the public portrayal of the religion that she called "Budddhism light."

That's why Ludwig has some concerns about the serioussness of some of the converts the Dalai Lama's visit might draw in.

Group facilitator Ray Ball agrees. He says Buddhism is filled with recovering Christians and Jews - or the curious and people looking for alternatives to psychotherapy.

The gray-robed senior student was himself brought up a strict Catholic. But he long ago devoted himself to Buddhism. He's even a member of the Zen Mountain Monastery in the Catskills. But he said to become a member there requires much more than curiosity or dues.

He said the training is rigorous and would-be students must be struggling with issues of life and death.

Fortunately, the admission price isn't quite so stiff for people interested in exploring a Buddhist practice locally. Ball said, at their Zen Group, all they ask is that you bring an open mind.