Buffalo, NY (USA) -- Dalai Lama mania hit the Buffalo area Tuesday, as thousands descended on the University at Buffalo North Campus in Amherst to hear a "simple monk" deliver a message about the power of human compassion. 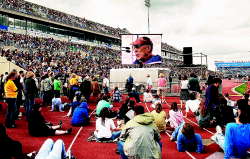 << Derek Gee/Buffalo News
Some audience members abandoned their stadium seats to gather at a giant video screen on the field for a closed-circuit take at Tuesday's address of the 14th Dalai Lama to a sold-out University at Buffalo Stadium.

It is, he said, essential for those searching for meaning and success in life.

"I think warmheartedness is the key," he said. "That gives you deeper satisfaction and more happiness."

The university canceled classes on the North Campus. Vendors sold beaded necklaces and Buddhism books. People took off from work, and their children skipped school. Security on campus was tight.

"What's going on here?" asked one woman, as a large crowd formed around an escort vehicle.

"We heard it's the Dalai Lama," responded another.

While the local Buddhist community is relatively small, the spiritual leader captivated Western New York enough to pack a football stadium and bring another 6,000 to fill Alumni Arena for an interfaith service Monday afternoon.

Besides UB students, staff and faculty, the visit by the exiled Tibetan leader also drew several thousand from across the border, the Rochester and Syracuse areas, and from as far away as the states of Washington and Florida, university officials said.

In a world filled with daily fears and anxieties, people were curious about this man filled with inner peace.

"I really don't know that much about Buddhism, but he's a world iconic figure and here he is in Buffalo," said Sharon Nisengard, 32, of Buffalo. "I would say his name brought me more than anything."

For those who came to hear him speak because they were curious about who he is, and what he had to say, that's OK, the Dalai Lama told the crowd.

But early on he warned those who came expecting to see him perform miracles and see healing powers.

Instead, the Dalai Lama over and over again stressed "warmheartedness" as the theme of his address, "Promoting Peace Across Borders Through Education."

He appealed to educators to help students from kindergarten through college develop compassionate hearts.

And he stressed that theme in marital relationships, too.

"We need more patience, more reconciliation from both sides. Particularly those who have children," he said to couples. "Think more compassionately, at least toward your children."

Eager to beat traffic or drop in on any number of lectures being offered, curious spectators began arriving on campus by 9 a.m. Tuesday.

Some of the educational events surrounding the Dalai Lama's visit drew long lines, including a ceremony marking the deconstruction of a sand painting that Tibetan monks had created over the prior three days. A talk by Lama Surya Das, a UB alumnus who has studied with the Dalai Lama and is well-known among practitioners of Tibetan Buddhism in the West, was filled to capacity.

Some groups on campus had a more intimate encounter with the famous monk and his trademark good humor.

"I was curious to see what kind of aura and personality he has," said Thomas Szyperski, one of 300 faculty members who met with the Dalai Lama for about an hour in the morning. "He's a very calm person, a very friendly person, a lot of humor."

The Dalai Lama took about eight questions from the faculty, on a range of issues from "why are we on this earth?" to world overpopulation, said Szyperski.

"His replies were quite lengthy," the chemistry professor said.

A group of about 175 Asian students also met for an hour with the Tibetan leader.

"He's really special," said Chris Lee, a native of Taiwan and a graduate student in business. "He's not allowed to go to Taiwan now, so this is probably our only chance to see him."

The Dalai Lama was introduced by UB President John B. Simpson on stage at about 3 p.m., when he received an honorary doctorate in humane letters by State University of New York Chancellor John Ryan.

Wearing a red robe and visor to keep out the sun and wind, the Dalai Lama sat on stage with his translator at his side for those moments when he was looking for the right word. With state, local and university officials sitting behind him, the Dalai Lama spoke for more than an hour, before fielding questions submitted earlier.

During his speech, the Dalai Lama also addressed those who heard what he had to say and didn't like it.