A bar challenges a Buddhist

New Haven, CT (USA) -- Gunfire outside a bar in the heart of Westville Village has sparked a renewed organizing effort by fed-up neighbors like Padma Karma, who runs a Buddhist center next door. 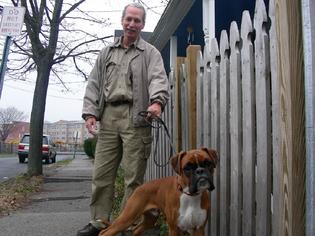 << Padma Karma and his dog boxer

Neighbors have for years complained about drunken rowdiness in and outside Owl's Nest Cafe at 3 Tour Avenue, right off Whalley. A few years back they lobbied the state liquor commission to deny a permit for the bar's new owner. (The new owner has the same last name as the previous owner, who lost his license for legal violations.) Neighbors lost that fight. They've continued to complain about the bar, but not often in an organized way.

Until now. Late last Friday night a bar patron apparently fired five gunshots outside the bar. (No one was hurt.) The incident frightened the neighbors and brought other simmering complaints to the fore. Thursday night they were planning a meeting to prepare for an upcoming meeting with the mayor.

"We're going to ask the mayor to come out to Westville and walk the neighborhood" to see the impact the bar has had, said one of the organizers, Thea Buxbaum, who's hosting the Thursday meeting at 425 West Rock Ave. The neighbors want the city to install "speed humps" and new curbs and sidewalks on the block.

Padma Karma can't make it to the Thursday night meeting. But he said he's with the other neighbors. He has lived next door to the Owl's Nest for nine years; his family lives on the second floor of his house, and he runs a Buddhist center on floors one and three. "There hasn't been a day that we don't have problems with this bar," he said.

Just a few weeks ago a bar patron slammed into his car and caused $4,500 of damage, Karma said. The other night another patron sideswiped his wife's car.

Besides the noise, he said, he contends with cars parked illegally on the narrow one-block street. "It's ugly," he said.

The bar's owner, Jose Cunha, wasn't around at 12:30 Thursday afternoon. The cook in the kitchen said he was too busy to talk. So did the waitress. Neither would offer a way to get in touch with Cunha. "I don't get into that. I just work and go home," the waitress said.

An Owl's Nest regular, Tony Brown, was drinking a lunchtime Bud and a Hennessey.

Brown is a maintenance worker at the public library. He said he hangs out at Owl's Nest all the time -- afternoons, evening. He was there last Friday night, smoking a cigarette on the sidewalk, when someone fired the shots into the air, he said. It was no big deal, he insisted.

"It's a nice bar. No fights or anything," Brown said. He has only one complaint: "The police tell people" to move their cars sometimes.

Brown noted that a person was actually shot in a fight outside a different bar recently, around the corner at Jacks or Better. "That's a wild place. I don't go near it," he said.

"These things probably happen at any bar. Can they be stopped? No. Can something be done about it? Yes."

Starting Thursday, Somers and the city will likely hear more from the Owl's Nest's neighbors about how to make that happen.