North Adams, MA (USA) -- Despite frigid temperatures and blustery wind, a small group of Japanese Buddhist monks and nuns trudged through the city's streets early Monday morning as they began a four-week peace walk set to end in the state's capital. 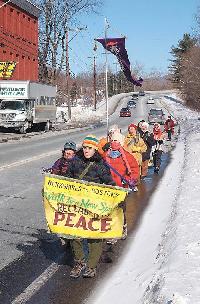 "They began walking after the events of Sept. 11, 2001," Sister Natalie Cain, director of the Women's House of Peace, said. "They (the Japanese) are still so aware of the effects of nuclear fallout. There are still people alive who survived the atomic bombs. They are aware of the need to awaken the world and stop nuclear warfare."

As part of this year's "Walk for a new Spring," the Buddhists will visit the cities of each of the 19 Massachusetts mayors who have joined the Mayors for Peace. More than 1,550 mayors worldwide, including Mayor John Barrett III, have committed their cities to stand for the abolition of all nuclear weapons by the year 2020.

"All of the mayors in Western Massachusetts are Mayors for Peace," Sister Clare, a nun with the Nipponzan Myohoji Buddhist order out of Leverett, said. "We decided to start here, in North Adams, and travel south for this part of our journey."

Members of the Nipponzan Myohoji order differ from other Buddhist sects — instead of seeking personal salvation or enlightenment, they devote themselves to ridding the world of weapons.

"Nuclear weapons are proliferating around the world," Sister Clare said. "The only real homeland security is to commit to the abolition of nuclear weapons. In a week's time, our walk will bring us to the nuclear power plant (Vermont Yankee) in Vernon, Vt., where we will be calling for it to be closed down."

As part of the peace walk, which is aimed at finding ways to "root and nourish the power of peace and equity" at the local, national and global levels, people are encouraged to join the group on its walk.

UNITY program director Mary Parkman said she planned to walk with the monks to St. Mary's Church in Cheshire. She said she was inspired to join the group's walk after learning about it through Cain.

"I heard Scott Ritter, a former U.N. weapons inspector, speak at Williams (College) last week," she said. "He made a very believable case for a real possibility of nuclear weapons being used as a result of the Bush administration's policy in the Middle East. I used to think nuclear weapons wouldn't be used, but there is more posturing in the world today. The way things are going, it could happen."

Deborah Brown, a Women's House of Peace board member, said she was joining the walk because of her feelings about the war in Iraq.

"The war has just gotten to be so unbearable," she said. "I don't know how far I'll be walking with them today, but I believe any little effort seems worthwhile."

For Sister Clare, the group's message is one about seeing the human race live in harmony.

"We are all really one humanity, one family," she said. "We all really want the same thing in the end — to be happy and healthy. To do that, we need to put down weapons and renounce war. We need to believe in humanity and let go of our fears."

She added, "At the same time, we honor all of our soldiers overseas. They are doing an honorable thing, but sadly have to experience a war that is so horrendous. They are suffering physical and spiritual damage."

The Buddhists planned to reach Pittsfield by evening, where they would go to a potluck supper. The group would then ride to Lee. Today, they plan to walk to Great Barrington and then travel to Westfield. The walk is scheduled to end at the Statehouse in Boston on March 21.

For daily contact information, call (413) 253-7609. More information about the Nipponzan Myohoji order or the Peace Pagoda in Leverett can be found at www.peacepagoda.org.