Tempest Over A Temple

Newtown, Connecticut (USA) -- Hiang Uaen and Richard Coburn came to Boggs Hill Road for pretty much the same reasons: the tranquility, the woods and ponds, the sound of birds in the trees. But that is where their neighborly compatibility ends. 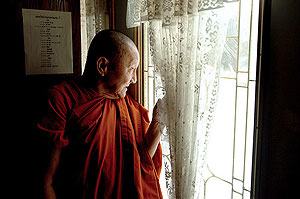 << ONE OF THE MONKS, Heng Hok Sim, 78, is apprehensive as he peeks out the window of the residence at an approaching visitor. The monks say they are on edge after town and neighbors’ opposition to the Buddhists’ proposal to build a permanent temple on their 10 acres.
(PATRICK RAYCRAFT)

Uaen is one of four Buddhist monks who moved into the renovated barn in Newtown shortly after the Cambodian Buddhist Society purchased the property nearly a decade ago.

Coburn is president of the Newtown Residential Preservation Society and a 37-year resident of Boggs Hill who can still remember when it was safe to take your children on a horse-drawn wagon ride up the winding country road.

Since 2002, when the Buddhist society applied for a special exception from zoning rules to build a 7,600-square-foot temple on its 10 acres, Uaen and Coburn have been on opposite sides of an increasingly bitter battle. It has played out largely in hearing chambers and courtrooms as a zoning dispute that has made it all the way to the state Supreme Court.

But it also played out more quietly as a clash between two cultures and dueling accusations. Neighbors say the society held rowdy outdoor festivals for hundreds of people on the property before the town issued a cease-and-desist order, and they complain that the temple plans have been both vague and fluid since they were filed.

More serious are the accusations of religious intolerance and petty vandalism leveled by the Cambodian Buddhists against residents of a classic New England community that is more commonly identified by the 110-foot flagpole in the middle of Main Street and tidy rows of antique homes that line the town center.

Coburn called the accusation ridiculous. Residents, he said, are opposed to the project because they believe the temple would generate too much traffic and septic usage for a rural neighborhood that is zoned for residential use.

"We're not bigots. We just want to be decent, law-abiding citizens and we expect others to be, too," Coburn said last week, adding that several residents have offered to help the society find a more suitable property in Newtown for its temple.

At the society's home on Boggs Hill Road last week, Uaen, the head monk, and three other monks gathered in their saffron-colored robes for evening prayers and meditation in front of a low altar. A large gold statue of Buddha and at least a dozen smaller statues sit in front of a section of wall painted to depict the tree and surrounding forest in India where Buddha Shakyamuni was enlightened in 649 B.C.

The room was intensely still, the only sounds coming from a clock and the wind rattling tree branches outside. Four of the society's elders kneeled on mats behind the monks, while Pinith Mar, who, at 38 is one of the younger generation in the Cambodian Buddhist Society and is still becoming comfortable with the practices of Buddhism, looked on.

The teachings of Buddha 2,500 years ago are practiced by these four monks and, as a result, when they sit down later to talk about the conflict over the temple, not one of them will say anything critical of their neighbors.

"We're here for peace only," said Uaen through a translator.

Other members of the society, however, said there has been hostility against the project from the beginning - hostility that culminated in February 2003 with the planning and zoning commission's unanimous denial of their application.

Society members complain that there have been numerous acts of vandalism against the property. The mailbox has been knocked over repeatedly, they said, and once someone arranged empty beer bottles in a circle around it.

People on motorcycles ride up the driveway and rev their engines as they race around the property, they add. There has even been verbal harassment.

"An older member who went outside the house, they got yelled at, `Go back to your own country!'" Mar said.

Neither Newtown Police Chief Michael Kehoe nor First Selectman Herbert Rosenthal were aware of the harassment described by the Buddhists. Police records show only a smattering of complaints from the Buddhist society, said Kehoe, including one about a felled mailbox.

"Those could be isolated incidents," Rosenthal said. "But we're a town of 28,000 people and I'm sure we have our share of individuals who harbor those views."

Mar and others said the dispute has exacted a heavy toll on the society's members. They believe that time is running out for the elders to pass along the practices of Buddhism to the younger generation and ready themselves for death.

Mar, who escaped from a Cambodian refugee camp when he was 13, said all the adult members of the society were victims of the Khmer Rouge, the communist party that ruled Cambodia in the late 1970s. Because Khmer leader Pol Pot and his followers executed monks along with intellectuals and professionals, the culture and religion of Cambodian Buddhism exists solely in the memories of those who survived.

"My father passed away two years ago without seeing the temple," Mar said. "It's very hard for me to look at these elders and know they are facing a loss of everything."

There is a practical issue at hand. Buddhism is made up of what are known as the Three Jewels: the Buddha; the Dharma, the teachings of the Buddha; and the Sangha, which includes the monks, the temple and worship. If one of these things is missing, you can't truly practice Buddhism.

When the Cambodian Buddhists found their 10-acre site in Newtown, Mar said, they were elated because it contained the elements necessary for the creation of a temple - a pond, enough elevation for the temple to look out toward the east, trees, space for a garden, and tranquility.

That last quality is precisely what neighbors fear would be destroyed if the temple was ever built. 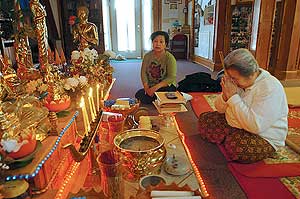 AT A TEMPORARY SHRINE in a Newtown house, Bith Thang Kham, right, of Danbury and Youta Khy of Waterbury worship. Four Cambodian Buddhist monks living there meditate twice a day and serve the spiritual needs of about 400 Cambodians who live in Connecticut. The town has rejected plans for a permanent temple.
(PATRICK RAYCRAFT)  >>

Neighbors don't buy the argument that the site on Boggs Hill Road is the only place the Buddhists can build their temple.

"People can go elsewhere and still have the elderly inspire the youth," Coburn said.

But Mar said the society already has spent a considerable amount of time and money on the current property and is afraid the same problems would crop up elsewhere if they started over again.

During the two public hearings before the planning and zoning commission in October and December of 2002, neighbor after neighbor stood up and voiced opposition to the plans.

Among the reasons cited were the usual concerns about traffic, the water supply and septic waste disposal that any significant project can generate. But according to transcripts of the hearings, neighbors also spoke at length about how the temple would destroy their quality of life.

One woman even said her stress about the proposed temple pushed her into a serious illness.

Many of them also said didn't believe society members' claims that there are only four or five major festival days a year - a mistrust born, they said, from the outdoor festivals that marked the society's early tenure on the property.

"We can only judge from their past actions that they will do whatever they can that they can get away with and we're concerned about that," said Robert Cox, a Boggs Hill Road resident.

Other residents were even more pointed in their criticism, accusing members of the Cambodian Buddhist Society and their agents of having little integrity.

"I don't feel that the Buddhists I have known would react in this way ... and would be so scurrilous in handling this type of matter, and so unforthcoming," said town resident Michael Stirk. "I feel they would have more integrity and I would expect that integrity, not only from a friend or a person, but I would certainly expect it from a religious institution."

Mar and other representatives of the society have acknowledged that the early festival days were an unfortunate way to begin their relationship with the neighbors, but say the crowds were prompted by excitement throughout the Cambodian Buddhist community about the property.

If built, this would be the first Cambodian Buddhist temple in Connecticut.

Rosenthal, the first selectman, said that while he and other town officials are sympathetic to the society's goals and the terrible ordeal they experienced during the Khmer Rouge era, they still have to do what is best for the town.

"As much sympathy as you can have for them, and I do, we still have to do what we think is appropriate," Rosenthal said. "It doesn't make it more appropriate because the people have a good reason to be there."