The dedication yesterday of the Pittsburgh Buddhist Center in Harrison was a feast for the senses.

Pittsburgh, PA (USA) -- There were monks swaddled in yards of orange cotton, the traditional ancient vestment of Buddhist priests; dark-haired, dark-eyed women in long dresses topped with saris; spicy-sweet smells from tables loaded with bowls brimming with food; the faintly undulating tones of Sinhalese, the primary language of Sri Lanka; and, overlooking it all, a 5-foot solid white statue of Buddha sitting samadhi, the traditional cross-legged pose of the meditating Awakened One. 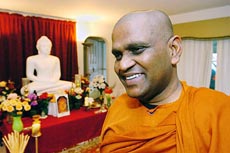 << John Heller/Post-Gazette, Post-Gazette
Sutadhara, a chief Buddhist monk from California, attends the dedication of the Pittsburgh Buddhist Center in Harrison yesterday. The ceremonies marked the official opening of Western Pennsylvania's first and only Theravada Buddhist temple.

It was a big day for the region's Buddhist community. The dedication of the Pittsburgh Buddhist Center -- an unassuming block building atop a little hill across from a car dealership off of Route 28 -- marked the official opening of Western Pennsylvania's first and only Theravada Buddhist temple. The closest is about five hours away in High View, W.Va.

Theravadan Buddhism is the oldest form of Buddhism.

"We didn't have any place of our own to go. Now, our kids will have a chance to learn the Buddhist teachings," said Dr. Chandrasiri Jayakody of Greensburg, a scientist with Chestnut Ridge Foam in Latrobe. A father of two children, ages 17 and 12, he moved from Sri Lanka, where about 75 percent of the population is Buddhist, to the United States in 1990. He is in the process of becoming a citizen.

Dr. Ananda Guna of McCandless, a computer sciences professor at Carnegie Mellon University, said he expects the center to draw visitors from as far away as Cleveland. There are about 300 families on the temple's mailing list.

Dr. Guna, a U.S. citizen who moved here from Sri Lanka about 20 years ago, has been heavily involved in establishing the temple in Harrison, largely because of his role as president of the 125-member Sri Lankan American Association of Western Pennsylvania.

Two monks will live at the Harrison temple, with the presiding priest being the Venerable Nehinne Ariyagnana.

The temple, which was converted from an existing home that the Pittsburgh Buddhist Center bought in September 2006, will host meditation services and Dhamma discussions, which center on Buddha's teachings.

The temple sits on two acres that Dr. Guna described as "central" to the region it expects to draw its participants from. The primary benefactors, Dr. Guna said, were Drs. K. and Ranjani Siripala of Altoona and Damitha Karunarathne of State College.

Discussions about forming a temple in Western Pennsylvania began in 2004, followed by a feasibility study last spring. Meanwhile, there had been several months of visits from the Venerable Ariyagnana, who had been leading meditation sessions at a temple in Breezewood, Bedford County.

"We determined in August that, yes, it would be feasible. The next month, in September, we bought the land and the house," Dr. Guna said.

The second monk who will be in residence at the temple is the Venerable Kamburupipiye Munindawansa. Three monks from Sri Lanka will be visiting for two weeks as mentors to the two monks in residence: Venerables Bopipiye Wansananda, Malegoda Nanda and Mathgama Mahanama.

The Venerable Munindawansa, 20, from Sri Lanka, said he is happy to be in the United States, helping to establish a temple for this region.

About three dozen Buddhist monks from throughout the United States and abroad were on hand for the dedication yesterday, as was the Sri Lankan ambassador to the United States, Bernard Goonetilleke.

The weekend of events included a religious ceremony and chanting Saturday evening as well as the dedication, speeches and a luncheon yesterday. The events were held outdoors under tents decorated with the blue, yellow, red, white and orange of the Buddhist flag to accommodate the crowd of about 200 that was expected.

Speakers acknowledged that the dedication of a temple in Western Pennsylvania is timely in that it precedes the 2,600th anniversary in the year 2011 of Buddha's enlightenment.