By Walter Jayawardhana, ToTheCenter.com, May 6, 2007

Virginia, USA -- The higher ordination of a Nepalese novice bhikku became the highlight of the Vesak celebration on May 6 at the Bhavana Society Forest Monastery in rural West Virginia in the United States. Vesak marks the birth of Buddha. 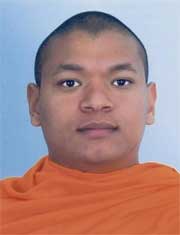 A society spokesman said the higher ordination was done under the preceptor ship of Venerable Henepola Gunaratana, head of the Bhavana Society Forest Monastery, Route 1, Black Creek Road, High View, West Virginia and under the tutelage of Ven. Witiyala Seewalie Thera, the founder president and abbot of the Minnesota Buddhist Vihara and Ven. Kirtijothi Thero of Nepal.

Novice Bhikku Bisho Kirti Maharjan was born in Katmandu, Nepal and was ordained as a monk at the age of 14 years at Kirti Vihara, Kirtipura Katmandu under the preceptor ship of Venerable Buddhaghosha Mahathera and under the tutelage of late Venerable Sudharshan Mahathera the abbot of the temple where the novice was ordained.