In Homage to Buddha, a Splash of Freedom

New York, USA -- AS the sun set on Staten Island’s south shore, a Tibetan Buddhist named Gyatso carried a crate of live shellfish down to the harbor. Squatting on a rock, his sneakers perilously close to the water, he submerged the crate, and then tossed the marine snails, one by one, into the sea. 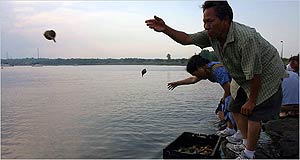 As he did so, he murmured the words “Om mani padme hum,” the mantra of compassion, for liberation from all negative karmas. “The best news,” Gyatso said of the snails, “is that they are saved from the frying pan.”

Gyatso, an energetic and compact man in his 40s who lives in Glendale, Queens, and, like many Tibetans, uses just one name, was among two carloads of Buddhists who journeyed on May 31 from Chinatown to Great Kills Harbor in Staten Island to observe Saga Dawa, a holy month. During that month, Buddhists are encouraged to preserve life in commemoration of Buddha’s birth, enlightenment and attaining Nirvana. This group chose to save marine creatures destined for dinner tables by releasing them into the sea.

For most of the year, the city’s estimated 2,000 Tibetan Buddhists worship privately in their homes; Saga Dawa is one of the few occasions on which they recognize their faith publicly, enjoying a religious freedom not available to them in their native land.

“This is for the people who live in Tibet,” said Gyatso’s friend Tsering Phuntsok, who immigrated to America eight months ago. Although she was trained as a nurse in India, she works as a nanny in New York. This day, she was celebrating her first Saga Dawa in the United States.

Because of the sacredness of the holiday, Gyatso had taken the day off from his job as a Battery Park street vendor. In the weeks before the holiday, he had collected $1,400 from 15 Tibetan families in Queens — most of whom, like Gyatso, work six or seven days a week, as caregivers, street vendors, busboys and taxi drivers — to buy crabs, clams, snails, fish and lobsters.

Supervising the ceremony were two Buddhist monks, Lama Thubten Phuntsok Rinpoche, 80, and his son Lama Dawa, 28. The monks, dressed in matching saffron and maroon robes, sat on a wooden bench facing the harbor and prayed, the elder monk’s prayers accented by quick turns of his portable prayer wheel, a spindle made from coarse cotton on which the scriptures have been painted. According to the Tibetan Buddhist belief, spinning the prayer wheel is as effective as reciting the prayers orally. And during this holy month, offering multiple prayers multiplies virtue in the afterlife.

After the release of the sea creatures, the group departed to Gyatso’s house in Glendale for the Saga Dawa Tsok puja, the group prayer and feast. Because Gyatso and his wife worship at home, they have converted the modest room into a showroom of Tibetan artisanship and veneration. Lining the walls are portraits of Buddha interspersed with brightly colored prayer flags. A large wooden table was decorated with candles, apples, rice, incense and fresh flowers, and a smaller table was heaped with overflowing bowls of grapes, berries, nuts and chocolate.

As Gyatso hit a button on the remote control, the flat-screen television under a gold-framed portrait of the Dalai Lama lighted up and a deep resonant voice, that of the pre-eminent teacher and author Dungse Thinley Norbu Rinpoche, who lives in upstate New York, emanated from the speakers.

It was nearly midnight before the prayers ended and wine was served. When the kitchen doors swung open, the smell of onions, chutney and spices wafted into the room.

Gyatso insisted that the meal was purely vegetarian and that no fish or seafood was served. And what of the creatures returned to the Staten Island harbor? Gyatso smiled. “They may have just a few more months, or years, but they will have a good life,” he said. “Freedom. And then with our prayers, they will be reborn into a better life.”