New York, USA -- To Rebecca Ballantine, a Brooklyn-dwelling mother of a two-and-a-half-year-old, her Tibetan nanny is a part of the family. Ms. Ballantine, who has a history of involvement with Tibet, knew her nanny for about six years before hiring her, and has become close to her nanny’s husband and son as well. Ms. Ballantine was also quite startled to learn, recently, that in having a Tibetan nanny, she is on the cusp of one of the most-talked-about child-care trends of the moment. 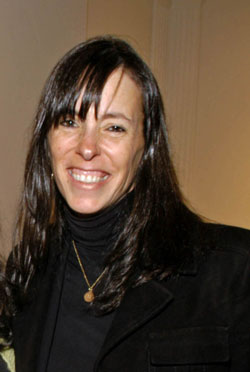 << “Mothers caught in the grip of the nanny search can get a bit crazy. Lucy Kaylin, Executive Editor, Marie Claire. (Photo: Patrick McMullan)

“I’m not really into the whole New York mom thing, so I guess I wasn’t aware that Tibetans were such a big thing,” Ms. Ballantine said.

By the time Gawker.com fingered the trend in a posting last summer—“Victims of Religious Oppression Hot New Childcare Accessory For Fall”—the Tibetan nanny craze had been the talk of playground-mothers’ groups and online parenting bulletin boards for many months.

“My nanny is Honduran,” read one posting on the popular Urbanbaby.com site. “Should I get a Tibetan? I hear they are all the rage.”

“Tibetan nannies … any ideas of where to find?” read another. “I like the idea of a Buddhist caring for my child.”

One of the site’s many enthusiastically pro–Tibetan-nanny subscribers assured fellow mothers that child-care workers from Tibet were “very balanced and Zen”; yet another explained,“Their personality is such that it makes them amazing nannies. Very patient, never lazy, soft-spoken and generally very caring.” Several suggested vaguely that the Tibetan nannies’ Buddhist heritage was the source of their supposed saintly qualities, even that a Tibetan nanny could contribute to a child’s “spiritual development.”

Other postings dealt with related topics such as where most of the Tibetan nannies in New York City could be found (Williamsburg, Brooklyn Heights and the West Village seemed to be the general consensus), whether to hire a Tibetan nanny who was known to be a victim of torture (could she accidentally harm a child while in the throes of a flashback, the subscriber wondered), whether Tibetan nannies should be given a day off work in honor of the Dalai Lama’s birthday, how to respond to snobbish mothers who openly brag about having bagged Tibetan nannies for their babies and whether some non-Tibetan Asian nannies were pretending to be Tibetan during job interviews in the hopes that it would help their prospects.

Any liberal-minded person not currently awash with post-partum hormones may well find such conversations bewildering, if not outright offensive.

Cringe-inducing testimonials to Buddhist child-care aside, isn’t seeking out a nanny of a particular ethnicity just a little, well, racist? Is the Tibetan nanny trend simply a new iteration of the already well-documented New York nanny fashion for hiring Chinese nannies capable of giving well-heeled little ones a leg-up in learning Mandarin? Or is the nanny-hiring process one of the few remaining areas of social discourse wherein it remains somehow acceptable to trade in crude ethnic stereotypes?

These are thorny questions—and embarrassing ones—for many new mothers.

“There’s kind of a mutually agreed unspoken agreement among mothers that all the normal rules about racism are off when you’re talking about nannies,” said one book editor in her early 30’s who asked not to be identified because her Filipina nanny is illegal. “People talk about ethnicity in a way they never would at any other time. Even people who are very aware of not making racial stereotypes will put that on hold when talking to other mothers.”

“Part of it is just a shorthand way of saying what you’re looking for, and what qualities you’d like to instill in your children,” the book editor continued. “Before I knew that Tibetan nannies were a status thing, a friend’s friend was telling me that they were the very best. You hear that Filipina nannies are the best because they have a history of being caretakers in the Philippines. You hear that Caribbean nannies are a bit tough, so they’re good if you have an unruly child with discipline issues.”

Lucy Kaylin, the executive editor of Marie Claire and author of The Perfect Stranger: The Truth About Mothers and Nannies, explained that many mothers are simply grasping at anything in the arsenal that might help them make what is at base a very emotional decision.

“As a good liberal, I certainly recoil at the labeling of people based on where they come from,” Ms. Kaylin said. “But among the mommy ranks it is strongly felt that you can make these distinctions. Some of the more common stereotypes that you hear are that Filipina nannies are deferential and quiet, whereas Caribbean nannies might be more inclined to be assertive about how the child should be dealt with. You hear that Latina nannies are very affectionate, and that English nannies and German nannies will run a tight ship.”

“When it comes to this high-risk critical juncture in your life as a family, you find people talking in terms that they would never normally use in polite society,” Ms. Kaylin continued. “Mothers caught in the grip of the nanny search can get a bit crazy. You’re desperate for clarity and information, and you find yourself poking around in realms of your psyche that you thought were well sealed off.”

Though much—some say most—nanny-hiring in the New York area is done illegally, the directors of Manhattan’s nanny-placement agencies are quick to point out that requesting a nanny from a particular nation or ethnic group runs afoul of U.S. anti-discrimination laws.

Joan Friedman, who has run the A Choice Nanny placement agency with her husband since 1991, said that she frequently hears requests from families for a nanny from a particular ethnic group.

“I don’t think people are trying to discriminate,” Ms. Friedman said. “I think it’s a simple lack of education about what the laws are in terms of discrimination. It’s funny. I’ll get a call from a family one day saying, ‘Please get us a Filipina nanny no matter what.’ And then the next day I’ll get a call saying, ‘We’ll take anything but a Filipina nanny.’ But there are a number of things that we’re not allowed to address with our nannies. For example, we can’t ask her whether she’s married or has children or what her religion is. And these are all things that are important to many people when they’re having someone working in their home.”

Cliff Greenhouse, the president of the Pavillion Agency, a Manhattan nanny agency, said that he can only field requests for nannies from a specific ethnic group if there is “a bona fide educational reason.”

“It certainly is totally legal for families to have any nationality preferences that they wish, but as an employment agency we’re not allowed to search for people from a particular place unless it’s related to a bona fide occupational qualification,” Mr. Greenhouse said. “If there is a bona fide need for a nanny who is actually an expert in the Tibetan culture—that could be for religious reasons, or for dietary reasons—then that’s one thing. But when someone says to us, ‘I heard the Tibetan nannies are great,’ then that’s something else, and we can’t do that.

“I get lots of families in New York who want Mandarin Chinese culture and education in their homes, and of course that is a bona fide educational request,” Mr. Greenhouse continued. “We’re seeing this more and more. It’s a result of the growing number of extremely wealthy families who can afford to seek out and employ someone to teach their children a language. And as the pool of Tibetans doing household work grows, then people are starting to request them as nannies more. People love the Tibetans.”

Of course, people of different cultures do raise their children differently; that’s why there’s such a thing as culture. Could there be some grains of truth behind the current hype about Tibetan nannies?

Malika Browne, a diplomatic wife who had her baby two years ago while on a posting to Nepal, where there is a large Tibetan community, explained in an e-mail why she’d never considered hiring a Tibetan nanny.

“They are a matriarchal society and you do not want to mess with Tibetan women!” Ms. Browne wrote. “Plus, Tibetans are stupendously beautiful most of the time, and I would worry!”