Buddhist ritual does not bring peace to environment regulators

Paterson, NJ (USA) -- A New York sect of Amitabha Buddhists bought hundreds of eels, frogs and turtles in Chinatown to set them free in the Passaic River, hoping they would not only survive but also realize their karmic potential. 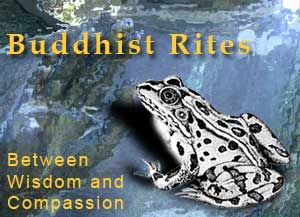 Saving the animals, though, did not do anything for the karma of the state Department of Environmental Protection. DEP pfficials say the Buddhists did not have a permit and may be subject to fines up to $1,000.

Releasing critters into the wild takes a permit - and because of fears of harm being done by nonnative species, New Jersey is reluctant to issue them out for anything beyond stocking fish ponds.

"We're dead-set against it," DEP biologist Mark Boriek told the Herald News of West Paterson for Tuesday's newspapers. "It's even illegal to stock any kind of carp or goldfish in New Jersey in a place with an inlet or outlet."

The DEP said it would try to figure out where the reptiles and amphibians came from to try to guess how they might impact the river, which has been cleaned up in recent years.

Authorities have not found the Buddhist group yet.

But one member, Ann Chin, talked to the Herald News.

She said the idea was not to hurt other species, but to save the animals that were destined for dinner tables.

"When I pass by the fish market, I cry," Chin said. "I tell people: 'Stop killing them.' Then: 'Don't eat them.' Then your heart goes to mercy."