Yale, NY (USA) -- Standing before a makeshift altar laden with flowers, fruit, candles and a golden statuette of Buddha, a man clad in long gray robes strikes a small black bell and chants in Korean. 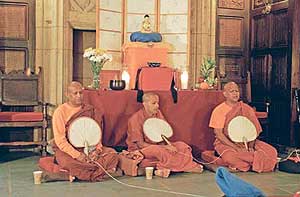 << Buddhists of the Indigo Blue chant along with students in the Branford College Chapel, channeling a welcome respite from Sept. 11 grief while reflecting and blessing those whose lives were lost.
Matt Lucas/Staff Photographer

As the sound of the bell reverberates off a vaulted ceiling, the light from the candles flickers along stone walls and across the faces of 10 students sitting cross-legged on small square mats. It is late in the evening, and some of them will tire and leave during the course of the night. But others will trickle in to join in the chanting, or to meditate silently, with their thoughts turned to the advent of the academic year and the anniversary of the Sept. 11 attack on the World Trade Center.

More than 40 students stopped by the little-known Branford College Chapel, located at the base of Harkness Tower, late Monday to attend an all-night Buddhist ceremony of blessing and remembrance called a pirith. Organized by Indigo Blue, the center for Buddhist life at Yale, the pirith began just after 11 p.m. and lasted until 7:30 a.m. on Tuesday. Students who came to reflect on the new school year and the Sept. 11 tragedy chanted alongside three monks from the New England Buddhist Temple and Bruce Blair, the University Buddhist chaplain.

Minh Tran ’09, president of Indigo Blue, said the idea to hold a vigil sprang from a spur-of-the-moment decision to have a ceremony to bless the beginning of the school year.

“With the new semester starting, you want an auspicious beginning,” Tran said.

Blair opened the pirith in the Korean tradition by approaching the altar, taking the lid off the “water bowl,” lighting candles and then incense, taking three steps back and performing a low bow. He then performed the “Evening Bell Chant” while the students, who were mostly barefoot for the ceremony, listened quietly.

Blair said the Monday night ceremony quietly commemorated the anniversary of the Sept. 11 tragedy by creating an opportunity to enter the day in a more reflective mood.

“The events associated with this day in recent history have been the source of immense suffering around the world,” he said. “Rather than naming that source in a particular way that then ends up setting up the mind in oppositional discourse, why can’t we enter the day with hearts that are clearer?”

A little under an hour after the ceremony had gotten underway, those present were joined by three Buddhist monks who, wearing long orange robes, led chants about the precepts of Buddhism and gave blessings for the new school year. They later led a threading ceremony in which one string was passed around to everyone in the room. Tran said holding the string together represents a communal way of sharing thoughts.

The monks left the group at 2 a.m., after students presented them with a plate of fruit as alms. The students then settled into a long night of continuously chanting “Kwan Seum Bosal,” a chant that calls for compassion.

Tran said people who participate in the all-night ceremony usually do not tire because the energy in the room sustains them. But he admitted that he has occasionally seen people doze off during these events.

“Oh yes,” he said. “Of course people have crashed, but they come back.”

Sashini Jayawardane ’08, an officer of Indigo Blue, said the group tried to show hospitality to students who had never experienced a pirith before by making the process as comfortable as possible. In an adjoining room, samosas — a South Asian snack — and black tea were available to help tired students keep up their strength. Blankets were laid on mats for those who felt cold in the high-ceilinged room.

“If you haven’t done this before, it’s hard to sit in one place and focus for about nine hours,” Jayawardane said.

The first ceremony of this kind occurred in the spring of 2005 in Battell Chapel following the tsunami disaster in Sri Lanka. Tran said he thinks this year’s event was successful and hopes the pirith becomes a yearly tradition.

When the event officially ended early Tuesday morning, some students who had stayed awake all night had only a few minutes to clean up the ceremony space, ask each other if they were feeling well and march out of Branford to attend class. Jayawardane, however, said she was not too worried, thanks to a favorable class schedule.