Kent, NY (USA) -- New Utrecht High School in Brooklyn shows up in the opening credits of the 1970s sitcom "Welcome Back Kotter." 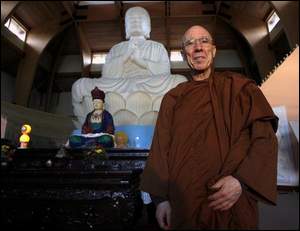 << The Venerable Bhikkhu Bodhi stands before a statue of Buddha at the Chuang Yen Monastery in Kent. Bodhi is a Buddhist monk who grew up in Brooklyn. He is considered a scholar of the Buddha's teachings, especially some of the earliest writings, and has taken up residency at the monastery.

While the Sweathogs never wandered New Utrecht's hallways, the Venerable Bhikkhu Bodhi did as a teenager during the Kennedy administration. Back then he was Jeffrey Block, son of a U.S. Customs Service worker and a homemaker. Now, he's a world-renowned Buddhist scholar living and teaching at the Chuang Yen Monastery in Kent.

"My mother would tell me the thing to be is an engineer, and then I inclined more towards the study of liberal arts," he said, sitting in a quiet, darkened dining room at the monastery off Route 301.

Fog clung to the hills cradling the monastery's buildings as Bodhi traced his path from a Jewish boy in Boro Park to a graduate philosophy student in California to his ordination as a monk. He was clad in a brown robe and black-and white rubber sports sandals. Later, during a rainy Saturday morning, he would don a maroon knit hat - looking a bit like a religious Jacques Cousteau.

At Claremont Graduate School in southern California, he met a Buddhist monk from Vietnam. The boy who was bar mitzvahed was now a man seeking meditation instructions and teachings on The Four Noble Truths, the first of which is that life means suffering.

After five years as a novice monk and completing his philosophy doctorate, Bodhi journeyed to Sri Lanka in 1972. There, he was ordained a full monk - signified by the name Bhikkhu. Bodhi means to be enlightened, he said, by the Buddha.

His parents struggled with his chosen course. His father is now 91 and his mother died five years ago. He has one sister.

"At first they didn't understand. I think they were upset more because it went against the grain of what they considered a normal, typical American lifestyle," Bodhi said. "I think my mother always had difficulty accepting the choice of lifestyle."

His choice, he said, was "a very unusual step" for an American in 1972. Then, he had to search out texts to study and teachers to explain concepts. Now, he said, it's easier for Americans to learn about Buddhism given the Internet and other available means.

Buddhism is considered the fourth most popular religion in the U.S. Between 1990 and 2000, according to City University of New York researchers, the number of Americans identifying themselves as Buddhist jumped 170 percent.

Bodhi said estimating the number of American-born Buddhist monks and nuns was difficult. Spread throughout places such as Thailand, Burma and Sri Lanka, each, he said, has his or her own story.

He returned to this country in 1977, studying and living at monasteries in New Jersey and Washington, D.C. Five years later, he went back to Sri Lanka. There, he became editor, and then president, of the Buddhist Publication Society. Translations of and writings about the Buddha's teachings followed, most recently the 2005 publication of "In the Buddha's Words." That is the foundation for his Saturday study course at the Kent monastery.

A visit with his father and sister in 2002 and chronic headaches led to his decision to stay. He has resided in Kent since February.

"In Sri Lanka, there are not doctors who specialize in headaches," Bodhi said.

A product of Wisdom Publications, "In the Buddha's Words" translates teachings from Pali (the language of the earliest Buddhist canon) and organizes them in a framework.

"What I find especially encouraging about this book is that it shows so clearly how much fundamentally all schools of Buddhism have in common," the Dalai Lama wrote in the foreword. "I congratulate Bhikkhu Bodhi for this careful work of compilation and translation."

For centuries, the Buddha's word was passed on orally. The Pali Canon was written down in the first century B.C. and is thought to be the text closest to his actual words.

"The title seems to imply we have direct access to the word of the Buddha just as he spoke it," Bodhi said during the first meeting of his study course this month. "But in the Buddha's day there were no tape recorders. Not only no tape recorders but no pens, no writing."

Rain drummed on the roof of the Great Buddha Hall as Bodhi addressed 45 students. Behind his right shoulder rose a 37-foot-tall Buddha statue - the largest in the Western Hemisphere.

"In those days it was considered almost sacrilege to write down religious text," he added.

For 90 minutes, he explained the book's organization and his plan for the course, which will run through December and continue in the spring.

Bonnie Smith of Ossining, a monastery volunteer who is taking the class, said she was looking forward to a discussion of the Buddha's various discourses. She said the book "gets in-depth" into his teachings. Smith drives a bus at Pace University in Pleasantville and is a poet and writer.

"Most of us are never going to achieve the incredible enlightenment the Buddha did," she said. "But it doesn't hurt to be on the path."