Westford, MA (USA) -- It's not every teacher whose class attendance depends on whether there's a lockdown under way. But the Venerable Ajahn David Chutiko, a Buddhist monk, has accustomed himself to the vicissitudes of prison life in three years of teaching meditation at the Federal Medical Center Devens. 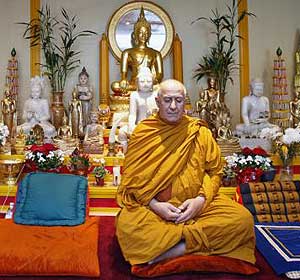 The prison at the former military base 40 miles outside Boston houses inmates with mental or physical illnesses.

Prison meditation classes were pioneered in India and are being offered in several US prisons. Prison officials in Seattle and in India have praised the classes for helping some inmates to leash their anger, according to articles in the Seattle Post-Intelligencer and San Francisco Chronicle.

It doesn't work for every prisoner, says Chutiko; while his every-other-week sessions draw a core group of 14, they have been attended by as many as 50, meaning that not everyone comes back for more. Insight from meditation is serendipitous, he says. "Even at Harvard University, they don't have an Insight 101 course."

Raised as a Catholic in Medford, Chutiko, 70, was exposed to Buddhism while stationed in Asia by the Air Force.

Later he met a Thai Buddhist leader who inspired him to make a retreat in Thailand, setting a trajectory that led to his ordination as a monk. Now he's vice abbot of Wat Buddhabhavana, a temple in Westford. Excerpts from a recent interview follow.

Q. Did you approach the prison or did they ask you to offer this?

A. [The Massachusetts Buddhist Association] asked me if I would be interested in doing work in the prison. It's the best part of my ministry. They're my best students. Meditation requires a bit of trauma in one's life, in order to bring people to it.

Q. Because people who have not experienced trauma are not in search of peace?

A. Exactly. And they get into the mind-set, "Tomorrow will be better." But they never do anything to make it better. The only way we can make tomorrow better is to make today better.

Q. But for a prisoner, tomorrow is never better. Tomorrow is more of the same, imprisonment.

A. It's a thought that's justified. But I've had prisoners - big, macho, 25-to-lifers - come up and throw their arms around me and tell me that the best thing that ever happened in their life was coming to prison and getting to meet someone who would be willing to teach them about forgiveness and unconditional love.

A. Usually, I try to have informal conversation before, to make them feel comfortable and set them straight on the intention of the class, which is not to rise up off of the cushion. Some people believe if you practice meditation, you can actually levitate. I make my prostrations and do the chanting: "I bow low before the Buddha. The Buddha is my refuge. I bow low before the Dharma [Buddhist teachings]. The Dharma is my refuge. I bow low before the Sangha [the order of Buddhist monks]. The Sangha is my refuge." I look each one of them in the face and say, "And I bow to your goodness." For many of them, that's the first time they were accused of having goodness. You can tell by the looks on their faces that they are actually shocked.

I give a 20-minute talk where, for example, if there are new people, now that I've said I bow to the Buddha, Dharma, and Sangha, it would be a good idea if they knew what it meant. Next is the meditation, and I give instructions throughout the meditation. [Meditation lasts] about 15 minutes. I can say that just sitting down, stopping running around, is a step in the right direction. In fact, the core group consider themselves prison monastics instead of inmates. The chaplains tell me [my class is] one of the better-attended groups of all the groups at the prison.

Q. To plagiarize from the song, do they know it's Christmastime in prison?

A. If I don't do anything else, I want them to understand that they can be as free as they want. The prison administration cannot take the real freedom: their freedom of thought, their freedom of mind, their freedom of happiness. We stress loving kindness in Buddhist practice, the self-discipline to have unconditional love. It takes unconditional love to forgive oneself. Someone asked me what do I see when I look in the eyes of prisoners. I can only tell you that for the most part, I see the look of unperceived goodness.