BUXTON, ME (USA) -- Dr. Sunil Goonasekera, 60, is a visiting professor in his second year at Bowdoin College, where he teaches four Asian religions, including Buddhism. 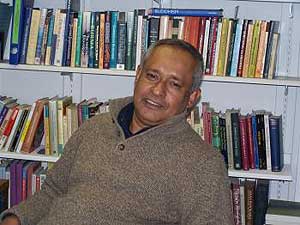 His specialty is anthropology of religion. He graduated from University of California at San Diego. He has taught there and at a major university in his native country, Sir Lanka. He and his wife live near San Diego, Calif., and each has a law degree.

Here is Goonasekera’s explanation of Buddhism:

“Buddhism exists in the form of two large sects – the Theravada and the Mahayana. Cambodian Buddhism belongs to the Theravada sect. Theravada temples exist in forests and villages. Forest monks live in solitude or in groups and dedicate their lives to meditation. Village monks, in addition to meditation, also provide community support by holding sermons to explain Buddhist concepts and by making available educational and medical facilities. The Theravada sect exists in Cambodia, Myanmar (Burma), Sri Lanka (Ceylon), Thailand, Laos and Vietnam.

"The Mahayana sect exists in Tibet, China, Japan, Korea and Taiwan. When Tibet was an independent country, its leader was Dalai Lama, the head of the Tibetan branch of the Mahayana sect.

"Buddhism is a religion founded around 6th- or 5th-century B.C. by the Buddha – also known as the Enlightened One, in northern India. The Buddha discovered the Four Noble Truths, the foundation of Buddhism. They are:

"The Buddha advocated a middle path, between extreme indulgence in pleasures of life and self-mortification, for living in the world. The Buddha also advocated a path to end suffering and to realize Nibbana. This is known as the Noble Eightfold Path. The eightfold path consists of eight practices: right perception, right conceptualization, right speech, right action, right livelihood, right religious effort, right mindfulness and right contemplation.

"The hallmark of being a Buddhist lay person involves taking refuge in the Triple Gem - The Buddha, Dhamma (his doctrines) and Sangha (the Buddhist monastic order), and observing five basic precepts. They are: I will not kill; I will not steal; I will not speak untruth; I will not sexually misbehave; and I will not consume intoxicating substances.

"These are promises that Buddhists daily make to themselves. Buddhist lay persons are advised not to let three conditions influence their thoughts – lust, hatred and delusions. They are required to engage in giving or charity, be disciplined and practice meditation.

"Buddhism is an agnostic religion that does not discuss the existence of a creator God. It neither affirms nor denies the existence of one creator. However, it does include beliefs in many gods. Gods are not considered as supreme beings. They are merely another bodiless state of heavenly existence.

It is not necessary to worship them in order to be a Buddhist. These gods also must practice Buddhism in order to realize ultimate Truth and achieve the ultimate state of being, the Nibbana, which is the cessation of existence.”