A Buddhist in the burbs

There is all sorts of “stuff ” these days. Some of it’s pretty cool stuff

Bucks County, Pennsylvania (USA) -- Vacuums that roll around on the floor without being pushed. Toasters that can toast your bread, fry your bacon and cook your egg at the same time. A phone that can download music, take pictures, track your expenses, tell you where you are and what the weather is. 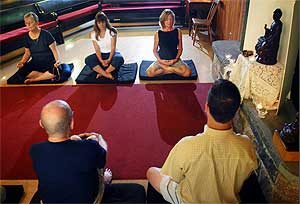 A fancy new version of that phone - the iPhone - was released Friday.

It just so happened that thousands of people were crowding the malls Friday waiting for a chance to buy that new version of the iPhone while hundreds of Buddhists were traveling from all over the globe to see the Dalai Lama in his first visit to the Lehigh Valley.

The Dalai Lama is teaching six days of classes at Lehigh University on an ancient text called the Lam Rim Chen Mo (“The Great Treatise on the Stages of the Path to Enlightenment”.)

So how can an ancient religion — one that eschews stuff — stay strong in an age where stuff has become so important to people? How do Buddhists live in the ’burbs?

Jeff Padawer, 52, an accountant from Furlong who practices Buddhist meditation but does not consider himself a Buddhist, challenged the question.

“It’s no different than if you were in the city or the country,” he said. “You go out in the country and there are animals and broken-down cars and crops. Where is there not stuff ?”

“Even the monks and nuns that were swarming around the Stabler Arena [at Lehigh Thursday] were talking on their cell phones. They live in a world of orderliness and behavioral expectation where they’re asked to handle their stuff with care.”

James Reis, the founder of the Bucks County Buddhist Sangha in Yardley, explained, “The Buddha is not saying not to have stuff, but to relieve yourself of the desire for it.”

Even the Buddha was faced with distractions and temptations, Reis said. “In 600 B.C., people had wealth, dancing girls and everything else.”

Buddhists acknowledge the universal truth that everyone wants to be happy.

“I think that people think they’re going to get happiness from things that are external to themselves. Happiness is something we generate from inside ourselves,” said Will Mead, a 51-year-old ceramic tile artisan and yoga instructor who lives in Doylestown and has practiced Buddhism for five years.

All of the local Buddhists interviewed said they meditate daily and study Buddhist dharma (teachings) and consciously work on applying it to their daily lives.

Some meet with other Buddhists — in temples, churches and their homes — to study and discuss the answers to life’s questions.

The big ones: What is the meaning of life? What are the causes of happiness? Why is there starvation in the world? How should they live?

The little ones: How should they drive on the highway? What should they do when someone cuts them off ? How do they deal with a workplace where people are gossiping? How should they feel when their neighbors get the newest iPhone?

Buddhists believe it’s important to meditate on all of the questions and to always do good.

“I believe the practice of meditation leads you to a deeper understanding of yourself and the world you live in. There’s less of an ‘I’ person, less of an ego,” said Marilyn Picciotti, 57, a yoga teacher who lives in Morrisville.

“We’re not all just these separate entities bumping against each other and reacting to the things we bump into every day and pushing away the things we don’t like and grasping for the things we do like,” she said. “But that’s how most of us see the world. That’s what causes people to experience suffering. So, if we understood and we had the wisdom to see things as cause and effect, then we would understand the interrelationship of our actions and we would choose our actions differently.”

Mead and other Buddhists said meditation helps them focus more on their actions and on taking only those actions that are helpful.

“We can all go and talk philosophy until we’re blue in the face and then go home and yell at our kids and have a fight with our spouse and go to sleep. What good does a philosophy do if it doesn’t train your mind to act differently? The world doesn’t change at all,” Mead said.

“That’s where personal responsibility kicks in. I’m not saying that I don’t have fights, that I don’t encounter times when I get upset. But I’m really mindful about it and work on it when it happens. And my life is unbelievable compared to what it was 10 years ago.”

So what about those little questions? How do Buddhists respond when someone cuts them off on the highway?

First they take a breath. Some chant.

“I just slow down and let them go,” Mead said. “I used to drive like that. I used to cut people off. So it makes total sense to me that people cut me off. Me getting pissed at them’s not going to do any good. I hate being pissed. I don’t like the way I feel. I pay the price when I get angry. It makes me old faster.”

Picciotti said she tries to put herself in the other driver’s seat.

And what about dealing with gossip in the office?

Leslie Ringe, a Warrington woman who has practiced Buddhism for 25 years, said it’s easy to get involved in that kind of negativity, but Buddhists try not to.

Ringe said, “I look at it from that perspective. How can I create something positive? ... Buddhism has this concept of oneness of self and environment. We’re two, but not two. So hurting somebody else is, in effect, hurting oneself.”

What about when their neighbors come home with the new iPhone?

Reis said Buddhists don’t suppress desire for those kinds of things. They ask themselves whether feeling the desire is good for them, and whether the object would help them improve their lives. “All spiritual traditions ask this: What’s really important? And what do I want to look back on when I’m 75?”