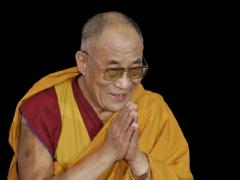 The mood set by protesters outside the Kimmel Center against the Dalai Lama was a sharp contrast to the mood inside, as arguably one of the world's most recognizable religious leaders, spoke to a sold out crowd of thousands.

The spiritual and political Tibetan Buddhist leader spoke for nearly an hour about Buddhism in the 21st century. For many in the crowd, they said he will lead them to the path of enlightenment.

The exiled Buddhist leader has commanded almost rock star status even with non-believers just vying to hear him speak.

But the protesting Buddhist monks and nuns outside clearly did not want to hear him speak as they volleyed chants back and forth with Dalai Lama supporters.

The group is not happy with his holiness. Clashing with the Dalai Lama over the right to worship a particular deity and to continue a nearly 400-year-old prayer that they said the Dalai Lama no longer allows.