Dalai Lama describes himself as 'just one monk'

The most famous Buddhist in the world insists he is "nothing special."

Philadelphia, PA (USA) -- "I am just an ordinary human being," the Dalai Lama, spiritual leader of Tibetan Buddhism, said yesterday, one day after his daylong visit to Philadelphia. 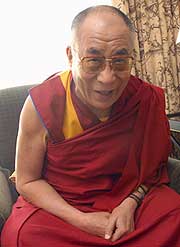 Some people think of him "as a living Buddha," he said, and laughed. "Nonsense."

Others revere him as "a god-king."

"Nonsense," he said again, this time leaning his head back as he laughed.

"Then some describe me as a demon, or a wolf with a Buddhist robe. That also I think is nonsense.

And that was how the 73-year-old Dalai Lama came across in an interview: spiritual, intelligent, extroverted, eager to make a personal connection, and, above all, happy.

He claps you on the shoulder to make a point. He leans forward to listen to a question, looking right into your eyes. He turns serious, then breaks out in a broad smile that just may explode into a belly laugh.

"Talking with people" and engaging with others as "human brothers and sisters" is what makes him happy, the Dalai Lama said, sitting in a chair in his room at the Four Seasons.

And when he hears that his teachings have changed a life and made a person happier, "I feel my life becomes something purposeful."

In person he seems not to have a care in the world.

Yet this man in a simple gold and red robe has carried the troubles of Tibet on his bare shoulders since he was a small boy.

In 1937, when he was just 2, a delegation of senior monks arrived at his parents' farm and pronounced him the 14th reincarnation of the Dalai Lama: head of state for all Tibet and spiritual leader of all the millions of Buddhists in his country as well as Nepal, Mongolia, Bhutan, northern India, and the rest of the high Himalayas.

He might have lived a life of isolation, little known to the outside world, had not Communist China invaded the capital of his mountaintop nation in 1951.

After eight years of fruitless accommodation with the Communists, whose troops demolished an estimated 6,000 monasteries in the hope of wiping out Buddhism, he fled on foot in the dead of winter to neighboring Nepal.

Later he moved to the northern India village of Dharamsala, where he and his followers built the monastery complex that serves as his home and headquarters of the Tibetan government in exile.

By force of his personality and spirituality, he as grown from a minor Cold War figure to someone akin to pope of the world's Buddhists, and the face of Eastern spirituality to many in the West.

In 1989 he won the Nobel Peace Prize, and still leads the struggle to regain Tibet's independence from China while circling the globe to lecture on tantric, or Tibetan, Buddhism.

"I am busy," he admitted, but he maintains his energy, he said, by caring for his body.

He ends all his public events by 4:30 p.m., he said and - like most Buddhist monks - eats no dinner. He sleeps eight or nine hours a night and arises each morning at 3:30 to meditate four or five hours every day.

He is "hopeful" and "optimistic" that the world will become a better place in the 21st century, he said, provided people promote the "inner values" of peace and compassion at the heart of Buddhism.

But he does not anticipate the West will turn Buddhist - a prospect that worried Pope Benedict XVI and other Christian leaders.

"I don't think so," the Dalai Lama said. "A few hundred thousand, even a few million," might convert. "But the majority will remain Christian, as it should be."

Some Buddhist practices, such as meditation, "can be used according to your own faith. . . . Already some Christian monks and Christian ministers are practicing Buddhist methods or techniques without changing their religion."

He chided some Western practitioners of Zen Buddhism who shave their heads, wear Zen robes, and "even change their furniture," he said, laughing once again.

"That's not necessary," he said. "Religion is in the mind, not in costume."

The goal for any human is to "minimize such emotions as fear, hatred," he said, and "try to increase love, compassion with forgiveness."

"On that level, I don't think there's much difference between Eastern or Western religion," he said.

He has turned over much of the administration of the Tibetan government-in-exile over to others, he said, and so is "semiretired" from that duty.

But as for the other two duties of the Dalai Lama - "promotion of human values and promotion of religious harmony . . . till my death I am committed."