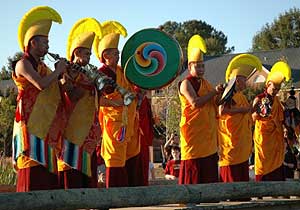 << St. Mary's College of Maryland will host a visit by Tibetan monks, who will create a mandala sand painting and lecture on Buddhist traditions during four days of events open to the public. (Submitted photo)

During the monks' visit to SMCM, the local community will have opportunities to attend public lectures and watch the monks in ceremonial garb carefully construct the sand painting.

The monks will painstakingly place millions of grains of sand into place on a flat platform over a period of days to form the image of a mandala. "Mandala" is a Sanskrit word for the subject of a Tibetan sand painting. Formed of a traditional prescribed iconography that includes geometric shapes and a multitude of ancient spiritual symbols, the sand-painted mandala is used as a tool in Buddhism for re-consecrating the earth and its inhabitants. The design symbolizes the universe and its powers.

It represents the world in its divine form, a map by which the ordinary human mind is transformed into an enlightened mind, and the perfect balance of the energies of the body and the clear dimension of the mind.

On previous U.S. tours the monks have displayed this sacred art in museums across the country, including the Arthur Sackler Gallery, Washington; Field Museum of Natural History, Chicago; Peabody Essex Museum, Salem; the Indianapolis Art Museum, Indianapolis; Kimbell Art Museum, Fort Worth, and The Provincial Museum of Alberta, Edmonton, Canada.

The following events will take place on campus in Daugherty-Palmer Commons and are open to the public:

Monday, Sept. 15, 12:30 p.m., Opening Ceremony: The monks will begin the four-day creative process by constructing the altar for the sand mandala painting with approximately 30 minutes of chants, music, and dance. Afterwards, they will begin painting the mandala with fine colored sands.

Tuesday, Sept. 16, 9 a.m.-noon; 1-5 p.m.: Mandala Construction. The monks will pour millions of grains of colored sand into the mandala outline.

Wednesday, Sept. 17, 5 p.m, Lecture: "Symbolism of Mandala." The senior monk in the delegation will describe the significance of the sand mandala. As the mandala will be partially completed, this is an opportunity to learn about its meaning.

Thursday, Sept. 18, 5 p.m.: Closing Ceremony. After continuing to create the mandala, the monks will dismantle it by sweeping up the colored sand. They will then lead a procession, which the public is invited to join, to a pond on campus. There, they will pour the sand into the water, symbolizing the Buddhist idea of the impermanence of life.

Background on the Ritual

All mandala sand painting begins with an opening ceremony, during which the monks consecrate the site and call forth the forces of goodness. This is done by means of chanting, music and mantra recitation. The monks begin the exhibit by drawing an outline of the mandala on the wooden platform.

On the following days they lay the colored sands. Each monk holds a traditional metal funnel called a chak-pur while running a metal rod on its grated surface. The vibration causes the sand to flow like liquid.

Traditionally, most sand mandalas are destroyed shortly after completion. The sands are swept up and placed in an urn. To fulfill the function of healing, half is distributed to the audience at the closing ceremony, while the remainder is carried to a nearby body of water, where it is deposited. Buddhists believe the waters then carry the healing blessing to the ocean, and from there it spreads throughout the world.