Peterborough, New Hampshire (USA) -- For days on end, hours at a time, monks from southern India recently worked at a small New Hampshire museum creating a work of art known as a sand mandala. 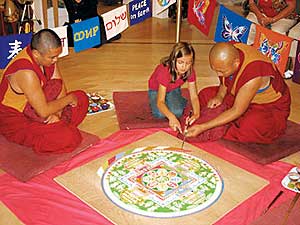 << The sand mandala created by Tibetan monks ended up in the Contoocook River.

They hunched over the floor, working with small tubes, funnels and scrapers, meticulously arranging dyed sand into intricate geometric proportions and patterns. A week later, when every detail was perfected and their work was complete, the monks promptly destroyed the masterpiece they had so painstakingly created.

A Tibetan Buddhist tradition, the practice of destroying sand mandalas symbolizes the transitory nature of all material things and the impermanence of all earthly creations, although officials at the Mariposa Museum in Peterborough, which hosted the monks, acknowledged that the art’s destruction can be difficult for an audience to watch.

“It’s hard on the kids, but I think it’s harder on the adults,” added museum Education Director Terry Reeves. “People are pretty astounded by it.”

The Peterborough visit was the final stop on a yearlong U.S. tour for the four monks who hail from the Gaden Jangtse Monastery in southern India. The monks’ visit, which ran from Sept. 3 to Sept. 10, kicked off a museum exhibit showcasing the cultures of India, Tibet and Nepal. The sand mandala proved to be a particularly powerful draw for the museum, which is dedicated to the exploration of world cultures.

“It’s an extremely magnetic event,” said Blair. “People are coming from quite far to see it. The children in particular just sit and watch in silence. They really tune into it.”

“It’s quite a hit,” Reeves added. “I had seven school groups come in [on one day] alone.”

Reeves and her husband hosted the monks in their Peterborough farmhouse during their New Hampshire visit. “I was a little bit worried because my husband had to leave on a business trip halfway through, and he’s such an extrovert, so I was worried that I wouldn’t be able to entertain them properly,” Reeves said. “But they’ve been delightful. It’s been very lovely. We’d be happy to host them again.”

According to Blair, three of the monks hail from Tibet, while one is from India. None of the monks are fluent in English, but communicated through a translator. The U.S. tour was part of an effort by the Gaden Jangtse Monastery to raise awareness of Tibetan Buddhist culture and China’s oppression of Tibetan monks, as well as to raise funds for the construction of a Buddhist monastery and college in India.

The Gaden Jangtse Monastery was established in 1409 in Tibet. At one point, more than 7,000 monks called the temple home. But the monastery – like most of Tibet’s Buddhist temples – was destroyed in the 1959 invasion of the country by China, which sought to outlaw Tibetan culture. Monks from the monastery sought asylum in India, and rebuilt the temple there in 1969. Today, the monastery is home to approximately 2,600 monks.

And while few Mariposa Museum visitors will visit the monastery itself, the monks’ destruction of their art is a poignant moment that is likely stay with those who observe it for years to come, Blair said. As part of the closing ceremony, the monks performed several chants before sweeping up the sand, placing it in a jar and marching it down to the nearby Contoocook River, where the sand was immersed. Blair said all sand mandalas are released into flowing water as a means of spreading the blessing out to the world.

“The art is gone, but it’s the memory that stays with you,” said Blair.

---------
The Mariposa Museum is located at 26 Main Street in Peterborough, N.H. The “Sacred Places – The Cultures of India, Tibet and Nepal” exhibit runs through December. Admission to the museum is $5 for adults and $3 for children. For more information, contact the museum at (603) 924-4555 or visit www.mariposamuseum.org.