Washington DC, USA -- A historic event took place at the Sri Lanka Embassy, Washington DC for the first time ever. Ambassador Jaliya Wickramasuriya and the staff of the Sri Lanka Embassy organized an all night Pirith Chanting Ceremony, to invoke blessings of the Maha Sangha for the peace and prosperity of Sri Lanka, the United States and rest of the World on Saturday 27 September 2008 with the participation of all Chief Incumbents of all Sri Lankan Buddhist temples in the USA. 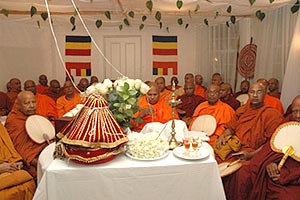 The Pirith ceremony was followed by a sumptuous alms giving at the Ambassador’s residence on Sunday 28 September 2008. The proceedings were in keeping with the vision and policies laid out in the Mahinda Chintana and tradition of the Embassy of Sri Lanka in Washington D.C of commemorating the important religious festivals of all four world religions practiced in Sri Lanka.

Foreign Minister Rohitha Bogollagama and Education Minister Susil Premajayantha were also present to grace the occasion, prior to their return to Sri Lanka after participating in the 63rd Session of the UN General Assembly, to join in and give their patronage to what was both a historic and memorable event for the Sri Lankan community in the USA.

The Foreign Minister took the opportunity to brief to the large gathering of Sri Lankan diaspora on the important steps being taken by the Government of President Mahinda Rajapaksa to bring lasting peace and development to Sri Lanka.

The Foreign Minister elaborated on the important statement made by President Mahinda Rajapaksa, in front of the world’s leaders at the United Nations General Assembley on 24 September, 2008 and the wide acclaim received by that statement. He also outlined developments in the Eastern Province of Sri Lanka and indicated that the Government of Sri Lanka hopes to bring democracy and development to the Northern Province in the near future.

The Chief Incumbents from all Sri Lankan Temples throughout the USA were very appreciative of the hard work and tremendous coordination that had resulted in such a historic gathering of the Buddhist clergy from throughout the USA. In the comments made by the Chief Incumbents many glowing accolades were paid to President Mahinda Rajapaksa and the Government of Sri Lanka and Ambassador Wickramasuriya for the important work being undertaken by them.

Over 40 Chief Incumbents of Buddhist Temples representing different states in the USA chanted Pirith on the 27th September. Over 300 Sri Lankans were present at the Embassy premises to participate in this meritorious event and obtain blessings. The Pirith Mandapaya was constructed in traditional Sri Lankan style by the “Ranga Kalakavaya”. The Embassy premises were illuminated with lights and Buddhist flags.

The event was followed by the Alms giving ceremony to the Maha Sangha at the Ambassador’s residence. All Sri Lankan Buddhist temples were gifted copies of Buddhist publications, including copies of the Tripitakaya by the Venerable Bodhagama Chandima Nayaka Thero.

The Sri Lankan community throughout the USA worked actively hand in hand with the Ambassador and staff of the Embassy of Sri Lanka to make this historic event a possibility. The members of the Coalition of Sri Lankan Associations (COSLA) deserve special thanks for the invaluable contribution made by them. The Embassy also wishes to express its deep appreciation to Sri Lankans throughout the USA who came forward to sponsor the participation of all Chief Incumbents and Buddhist monks on this memorable occasion.