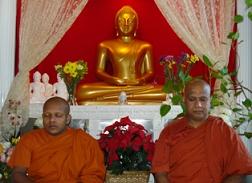 Worcester, NE (USA) -- It was a bitterly cold day, but a large crowd mostly of Sri Lankan descent gathered to celebrate the New Year in a special way; “One of the most powerful ways of blessing everybody for good health, prosperity, and peace according to Buddhist tradition is to give homage and recite chants remembering 28 Buddhas and their good virtues”, states the chief Abbott of the NEBV&MC, Venerable Aluthgama Dhammajothi.

The Buddhist vihara or temple was established in 2003 by Bhante Dhammajothi and members of the Boston Sri Lankan community. Although it appeared to be an inconceivable goal at the outset given the limited number of Sri Lankan families in the Boston area, the temple initiative began to attract more people from all ethnicities within a couple of years. Founder members spent an enormous amount of time and effort to get it off the ground by organizing various fund-raising events.

“I used to travel once a month from New York to Massachusetts for two years until I moved to Weston with my fellow monks back in 2005, when one member provided us with a temporary house,” recalls Bhante Dhammajothi. Since then, many people from Massachusetts and the surrounding states of Rhode Island, Connecticut, New Hampshire, Vermont and Maine, of various ethnicities, religions and nationalities have joined the Temple to participate in various programs and cultural events, and especially for meditation retreats.

In 2006 guardians of the temple bought a house in Framingham as a permanent venue to conduct their activities. “We largely focus on practicing Buddhist Meditation techniques in addition to other traditional programs. Every Wednesday evening at 7:00 PM, we have a meditation class at the NEBV&MC, which is now attended largely by Americans. These classes are conducted in English. Meditation is one of the best practices to reduce stress and control your emotions,” explains Bhante Dhammajothi.

In addition to meditation programs, there are classes for children to learn about Buddhist teachings in an enjoyable class setting. Cultural programs especially the annual “SaaRangaa” cultural event is designed for American-born Sri Lankan children to learn more about traditional music, dance, culture, and heritage while giving them an opportunity to showcase and develop their inherent talents for future advantage.

The main goal of this center is to provide various services to anyone regardless of one’s religion, ethnicity, or social status. These services are provided by a group of Theravada Buddhist monks led by Bhante Dhammajothi.