Gloucester, MA (USA) -- On a sizzling summer Saturday, while many residents swarmed the beaches, a number of others found cool refuge inside a former convenience store in Pigeon Cove. 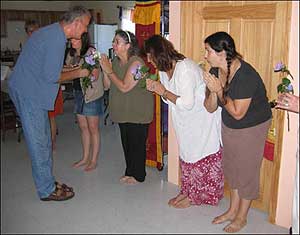 << David White, a visiting teacher at the Vajramudra Center in Rockport, is greeted by students before his lessons on Tibetan Buddhism on a recent Saturday afternoon

The once nondescript shop has been transformed into a tranquil setting with its peach-colored walls, burgundy cushions and soft-colored curtains. The Vajramudra Center on Granite Street that offers a nearly non-stop menu of activities aimed at helping people find happiness. It provides a home for weekly yoga, meditation, Tibetan Buddhism classes and special events — with guest teachers from around the world.

The center, which just opened a year ago, had a visiting teacher from France last month; Irma Gomez gave lessons on the subject of karma and emptiness — with "emptiness" not meant as a negative term, but as part of the path to finding spiritual peace.

Phil Salzman, who has worked in the public health and education field helping residents from youths to addicts, is among the many Cape Ann residents who find helpful lessons in the Buddhist teachings now offered in Rockport.

Salzman attended the first Buddhist retreat here five years ago, and was struck by the interest of residents. The fifth retreat, open to all, starts Monday at the wooded refuge at the Windhover Performing Arts Center, with Lama Sumati Marut — an American who is an ordained Tibetan Buddhist monk — again at the forefront of the teachings for the week-long event.

After the 2006 retreat, Salzman was among several Cape Ann students who committed themselves to studying Tibetan Buddhism together on a weekly basis. With the support of Lama Marut, actress and Annisquam resident Lindsay Crouse and her husband Rick Blue, they began to study the 18 formal courses of the Asian Classics Institute (ACI). The group grew in size and ultimately established ACI-Cape Ann, now a nonprofit organization.

In addition to the formal study, many others are interested. Dr. Deborah Bradley, a local physician, is another example of the varied background of residents who take part in the events.

"My family and I have been drawn to Lama Marut's teachings since attending Windhover in 2007," she said. "He's inspired us to make a priority of those things that matter most to our happiness — spiritual growth, compassion and love.

"Our family is the better for it," she said.

A core group of 50 people regularly study at the center, which now has a mailing list of more than 500. When Lama Marut taught in Essex in the spring, he averaged an audience of 200 people a night.

Today's retreat attracts an even a greater audience, with people traveling from all over the country to attend, with some planning to pitch tents on the grounds.

"The retreat's success has come primarily from the glowing word of mouth of those who have attended the retreat's powerful teachings over the years," said Salzman.

Cape Ann resident Elizabeth Enfield has attended Buddhist workshops for about 15 years, and is thrilled to have a center close to home.

"I think it does change your life, and teaches you about how to live a happier life," she said in an interview at the center. "You go from being ignorant to becoming wise in compassion and wisdom."

Salzman said the center has given the group an ability to expand its offerings as well as offer residencies for guest teachers.

Fallon, who studied at Diamond Mountain University in Tucson, made a year commitment to teach here.

He said the Cape Ann group has made tremendous strides in a short time.

"The community here is super kind, and it's amazing they have a center already," he said. "The sangha here — or spiritual community — is known now throughout the country. This is an outstanding example."

Fallon explained that the practice of Buddha is meant to teach others how to get out of suffering and find happiness.

"There's a way to do it and that's what our work is about," he said. "The idea of enlightenment is possible for anyone. There are formal courses which I can teach at a more relaxed pace because of this commitment here, and any newcomer is welcome. There also will be totally informal teachings, too."

White, a native of Scotland, has been teaching at several places, including the Three Jewels Dharma Center in Tucson, the ACI-Los Angeles Dharma Center and at Diamond Mountain University. He is a master Sanskrit teacher, translating original texts for his teachings.

The retreat this year will focus on how people can transcend the limits they place on themselves. Organizers note that while the retreat is based on Tibetan Buddhist principles, anyone who is interested in simply living a happier life is welcome.

Lama Marut will elaborate on the sources of happiness that never fail.

Crouse, the retreat director and an Academy Award-nominated actress — she was nominated for Best Supporting Actress for her role alongside Sally Field in "Places in the Heart" — said the 2009 event may be more important than ever before.

"We can't rely on external things to make us happy," Crouse said. "In fact, on account of the 'downturn,' we are perfectly positioned to look inside ourselves and try something new. All that we need is within us."

The Windhover Retreat has teachings throughout the week and offers many ways to participate on a sliding scale. Each day begins with guided meditation followed by Tibetan Heart Yoga with nationally-known guest teachers Kristina Pao Cheng, John Brady, Stephane Dreyfus, Jessica Kung and Julie Upton.

Sunday, Lama Marut will also participate in a special interfaith service at the St. Paul Lutheran Church in Gloucester. Marut, a professor of comparative religions at Columbia University and University of California-Riverside, is the spiritual director of ACI-Cape Ann.

"To hear Lama Marut teach is a priceless gift," said Crouse. "He's warm, fun, and has a unique ability to make things clear.

"He's like a watchmaker and you're the watch," she added. "He can take you apart and show you what makes you tick."

Gail McCarthy can be reached at gmccarthygloucestertimes.com

When: Teachings held throughout the day, Monday through Saturday, Aug. 31.

Cost: All 7:30 to 9:30 p.m. teachings, Monday through Saturday, Aug. 31, are open to the public by donation only. Suggested donation is $15. Full retreat cost is structured on a sliding scale based on days of attendance and includes all meals, yoga, meditation and afternoon teachings.